Athlete Of The Month: Jordyn Beaulieu 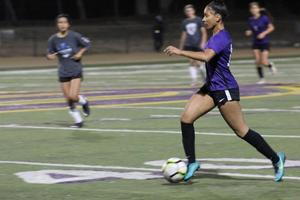 Despite not having any family history connecting her to soccer, Jordyn Beaulieu has been playing the sport  her whole life and is now a key player on multiple teams, including Diamond Bar High School’s varsity girls soccer team.

The senior began playing when her mother signed her up for the American Youth Soccer Organization when she was in preschool. In  middle school, she joined Legends FC, a national-level soccer club, contributing to the team’s  many tournaments wins in the Southern California Developmental Soccer League.

“I’ve always liked playing [soccer], and the adrenaline I get when playing,” Beaulieu said.

By the time she reached high school, Beaulieu had been playing soccer for ten years. She utilized that experience to earn a spot on the DBHS varsity team by her sophomore year.

During the school team’s off-season, Beaulieu stayed on the field with Legends FC. Most recently, Beaulieu and her Legends FC team won the championship of the SCDSL Fall 2018 tournament.

In past years as well, Beaulieu and her team have had great success, placing high in several tournaments.

Beaulieu and the DBHS girls soccer team also reached CIF playoffs this year, although they lost in the second round.

For both Legends FC and DBHS, Beaulieu plays the outside back. Although she was previously an offensive player, Beaulieu made the switch on the recommendation of one of her coaches. Now, her newfound position has made her into a key player for both teams.

“To play that position you have be a complete player,” Sipa said. “She knows to dribble, to pass, to cross the ball and be fast. She makes good runs and positioning. She also can defend, [and] she knows how to pressure and cover teammates.”

Just because she is a defensive player does not mean she is shy on the field, though. Beaulieu attributes her speed and aggression on the field to her family history of athletes.

“No one in my family played soccer before me, [but] my dad played football and my mom ran track,” Beaulieu said. “I think I have my speed and aggression from them too.”

These qualities are what helped Beaulieu to develop into an elite athlete capable not only of defending, but also at supporting her offensive teammates at the same time by creating scoring opportunities for them.

“She looks very quiet and shy but don’t let her appearance fool you,” Sipa said. “She is a true competitor.”

After high school, Beaulieu has verbally committed to play soccer at the University of La Verne.

“I was just interested in La Verne, so I only talked to them,” Beaulieu said. “I wanted to go there because [of] how close it is to my family and it’s a private school.”