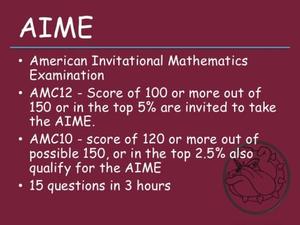 Approximately 140 Brahmas chose to take the national AMC math exam on February 7, 2019. Of those taking the exam, the following 5 Brahmas scored high enough to advance to the AIME exam in March. Congratulations! They will GET to take a THREE HOUR MATH EXAM on March 13. How awesome is that?!!