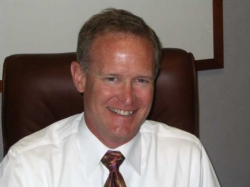 Bryan was picked from a pool of more than 70 candidates who applied for the position, according to district spokeswoman Laura Boss.

Corona del Mar High School is the highest academically achieving high school in the district with respect to test scores and college attendance.

Bryan will take charge in the wake of a year where the school got national media attention. Corona del Mar High was hit with an ACLU lawsuit when the drama teacher said Asrani canceled the school musical “Rent” because she objected to its depictions of homosexuality. Asrani said she merely wanted a chance to look at the script and approved the play in the end, but the conflict got the attention of gay rights groups and opponents of gay rights, and protests ensued.

Before Asrani signed on with the school in 2005, Corona del Mar had five principals in five years, according to school board member Karen Yelsey, whose children attended the school.

Yelsey is glad that a full-time replacement has been chosen in such a short time and that the school will not have to go through another rash of interim principals.

Although he works in Diamond Bar, Bryan lives in Corona del Mar, and his wife graduated from Corona del Mar High. He spent 23 years at Diamond Bar High School, starting as the band director before moving into an administrative position.

Bryan was known around the school for being a people person with a calm demeanor who was popular around the campus.

“We’re struggling, there are no two ways about it. He has been my right hand, my confidant. He has a very strong role in the operation of the school, which has expanded each year, and he has met every challenge I’ve ever given him,” said Diamond Bar Principal Denis Paul.

Paul compared Bryan with President Obama in his ability to get his point across without yelling and screaming and using moments of conflicts as opportunities to teach.

Going forward, Corona del Mar needs a leader who can engage students, parents and teachers and take their input into account when making decisions, Yelsey said.

“If he can engage all of those groups, then the school is going to flourish,” she said.
http://www.dailypilot.com/articles/2009/08/21/topstory/dpt-cdmprincipal082109.txt Source: Alan Blank of the Daily Pilot