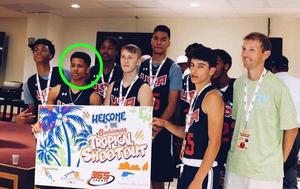 FROM THE BULL'S EYE
Story by Nia Mitchell

In a week and a half, the team played three times, defeating teams from Australia and Europe, but losing to the Bahamas team, which had the best record in the league during the tournament.

Greene received an invitation to join the team after recruiters from the Team USA were impressed by Greene’s playing style.

“Recruiters saw me at one of my games outside of school, and they sent me a letter saying they were really interested in my style of play, and asked me to play for Team USA,” Greene said.

Green said that the preparation leading up to the out-of-country games was intense. As an individual, he practiced daily for the competition that he would face against players from all over the world.

“Every Monday, Wednesday and Sunday, I would go to the beach and work out from 5 to 6 in the morning. After that, from 7:30 to 9:30 I would be in the gym. On Tuesdays, Thursdays and Sundays, I would also be in the gym from 2 to 6 pm,” Greene said.

The nine-person team trained together in Florida at the beginning of August before heading to the Bahamas.Getting the chance to play internationally with talented basketball players from all over the country was an eye-opening experience for Greene.

“The Bahamas might seem nice when it comes to the beaches and tourist stuff, but it’s mostly kids who have no shoes and tattered clothes,” Greene said. “When we played our games against the Bahamas teams, they rarely had jerseys. It made me feel humble. I was humble because some of those players were playing in running shoes, not even proper basketball shoes.” (In recent days, parts of the Bahamas have been decimated by Hurricane Dorian.)

In the first game they faced the Bahamas, Greene scored eight points, had three assists, and four steals but unfortunately lost the game.

“We played against the No. 1 team in the Bahamas, and that was probably one of the best games I had because it felt like we were fighting for something,” he said.

The high school players who made up Team USA came from different backgrounds. None of them had ever played together before, so the team members had to quickly create bonds and work with each other on the court.

“I’ve met all these new people from across the United States like Cleveland, Texas, North Carolina, all these types of places and it felt like I’d known them for years, so [during] our first game together, we played really well together,” he said.

Besides the skills he learned throughout the trip, Greene received insightful advice from the coaches.

“I’ve been known to have quite a temper,” Greene admitted. “My coach told me not to get so down after a play and always told me to always keep my head up because I’m the leader, so whatever I do, the other players on my team are going to do.”