Robotics Reaches Playoffs At The Beach 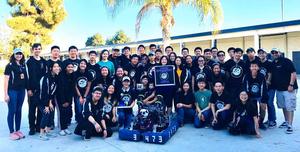 Congratulations to the members of our ROBOTICS TEAM, Team Sprocket, for reaching the playoff Finals at the FRC Beach Blitz competition the weekend of October 12.

After 10 rounds of qualifying matches, in a field of 36 teams, the team secured a spot in the playoffs as the 7th ranked alliance.

Robot drives, Calvin Ung and Trevor Hwee, steered the team’s bot to victories over the 2nd & 6th ranked alliances, earning them a spot in the Finals. While they played the game to the best of their abilities, they were ultimately overtaken by the 1st ranked alliance.

This marks the 3rd year in a row that the students have designed, manufactured and operated a robot that qualified for the Finals at a major regional event.