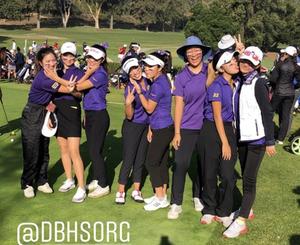 Congratulations to our DBHS GIRLS GOLF TEAM for taking first place in the team qualifier for the Southern California championships Thursday, November 7, 2019. The Brahmas shot a 383 and beat the favorite Troy team which shot a 385. Palos Verdes shot a 391 and took third place and the fourth qualifier was Sage Hill at 401.
But........ the even bigger story was junior Emma Han who shot a even par 72 to tie for first for the CIF individual championship. She had a two hole playoff and won the championship on the second hole making a par to beat Ashley Park from Sage Hill.
Congratulations to Emma Han winning the 2019 CIF Individual Championship!
The team moves on to the state semifinals November 14 at Brookside in Pasadena.
Print