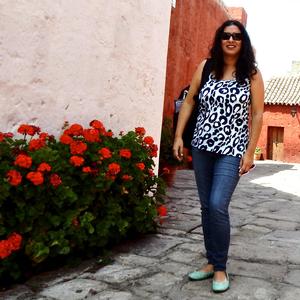 When Diamond Bar High School Spanish teacher Marco Leal accepted a promotion to become the assistant principal at Granada Middle School last month, it gave the administration little time to find a full-time Spanish teacher. However, there was one applicant who stood out and was hired soon after, Magali Rosas.

Instructional dean Julie Galindo said that  Rosas “stood out because she showed a wide variety of experience in all Spanish levels.”

“There was a receptive approach to finding out everything about our students and becoming involved at our school,” Galindo said. “She also showed emotional intelligence and discussed the importance of being a team player. “It was a tough applicant pool but she really stood out as a teacher who has a lot of experience and wants to get involved.”

Rosas, a native Spanish-speaker, moved to the United States from Peru after her husband was awarded residency by the U.S. government.

Before leaving, she had earned her bachelor’s degree in accounting at Universidad Nacional Mayor de San Marcos, the oldest university in the Americas.

Rosas worked as an accountant for several years, but after she helped out with the Spanish-English dual language immersion program her daughters were enrolled in, she found a passion for education and decided to become a teacher. With this goal in mind, Rosas earned her teaching credential at Cal State San Bernardino.

“I was working as a long term sub, and I was looking for a permanent position,” Rosas said.

She worked as an AP Spanish teacher at Eleanor Roosevelt High School in Eastvale for two years before being hired at DBHS.

“I’m still adjusting because the culture is different,” Rosas said. “Every school has its unique culture [and] unique student population, so here I have to adapt to the very high standards.  And I do like it, but it’s a process.”

Rosas and Leal actually expected to have more time to prepare her to take on her new job.

However, Leal had to begin his new job sooner, which came as a surprise to both staff and students. As a result, Rosas began teaching on her fourth day on campus, Oct. 14.

With the help of Galindo and Spanish department head Charlotte Sorensen, Rosas said she has been adjusting well.

Rosas is teaching Spanish II, II Honors and III Honors with the goal of teaching at the school for many years to come.

She also plans to earn her master’s degree in Spanish to further her teaching skills.