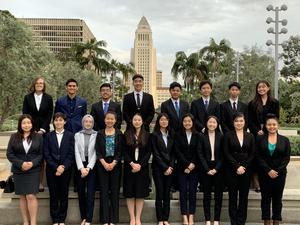 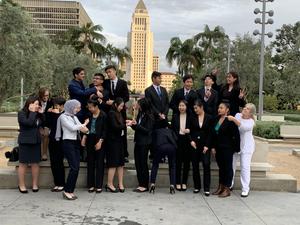 Congratulations to our Mock Trial Team for winning their QUARTERFINALS competition at the Los Angeles County Court House Wednesday, November 20, 2019. Our team took out the other team’s prosecution with a defense that couldn't have been more fantastic!

The night began with Emily Chen making the pre-trial motion that the defendant's constitutional rights had been violated when her office was searched without a warrant or permission. Emily is a force! Her voice, strong and commanding, her argument, flawless.  When the judge ruled in her favor, he used her words in the explanation of his verdict.

Even though the Prosecution witnesses get called first (prosecution last night was the other school) our three trial attorneys made it known that they controlled the courtroom. Ryan Lou, Sabrina Wu and Alexandra Chala (a freshman!!!) were smooth, sophisticated and confident. Sabrina Wu didn’t stand behind a podium, she stood next to it, never looking at her questions as she grilled her poor unwitting, witness with her cross examination.

Alexandra Chala presented the opening for the defense, without any paper at all, anywhere. Her presence was riveting.

The witnesses were incredible!

Housekeeper for the defendant, Sahil Patel set the tone for the defense with his convincing demeanor and smooth presentation.

Forensics expert, Aaron Hao, could start work at the coroner's office today. His knowledge of medical terms and his ability to describe his findings make it impossible not to believe that the drowning victim died of an accidental death.

Victoria Wang played an actress. if you know Victoria, this is easy to imagine, yet still doesn't prepare you when she walks up to the witness stand like she's on the red carpet, then gushes about her fame on the witness stand.

The night ended with Ryan Lou giving the closing arguments. He took his 7-minute argument, cut out a minute, on the fly, then added in several quotes from opposing council’s closing. It was amazing.

And then there is the Bailiff, Mingyu Liu, he had to help the opposing team's clerk to add time correctly to give the opposing team more time to finish their direct examination. Nothing is better than watching good sportsmanship.

GOOD LUCK BRAHMAS IN THE SEMIFINALS!