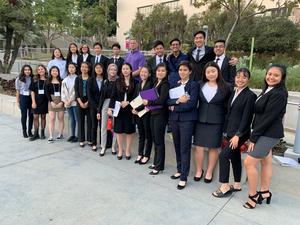 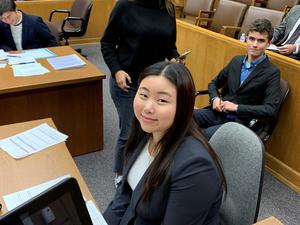 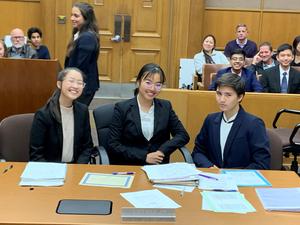 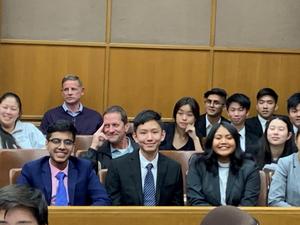 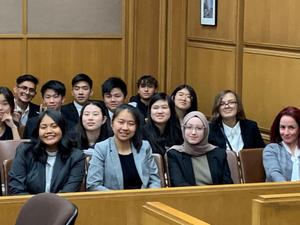 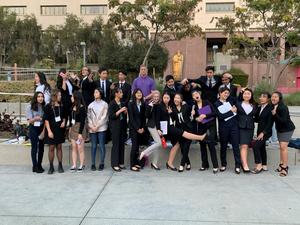 Harris Daud started the night with the Pre-Trial argument, attempting to show that Det Eisenberg's search of the defendant's detached office was included in his permission to search the defendant's house. The judge interrupted Harris with questions 7 times. (The opponent was interrupted only twice.) It was obvious that the judge knew Harris needed the challenge and try as he might, the judge could not stymie him.

Then Eileen Zu began the case for the prosecution with a glorious two-minute memorized opening, no notes, no podium, just her and the 4 imposing attorneys in the jury box, along with the stern looking judge staring at her. As good as her opening was, her cross of the defense's expert was glorious. With no notes, she began her cross, got permission from the judge to approach the evidence, and then berated the witness with questions about the evidence. She scored 48 out of 50 for her cross.

Crystal Tsao is a mighty trial attorney. Her confidence and matter of fact delivery make her sound every bit the professional. She handles far more objections then all the other attorneys combined. She is always calm, always succinct.

Courtney Chan was named MVP by the opposing team. She is a trial attorney like no other. Her calm presence and intimidating delivery remind one of the Yoda quote, "Judge me by my size, do you?" Her closing was effortless. The judge had no choice but to find the defendant guilty once Courtney concluded.

The four witnesses for the defense were FLAWLESS!

the Detective in charge of the case, Phillip Ma, took the advice of real detective Ken Carlson and made eye contact with the judge throughout his testimony. Impressive confidence! When Phillip described the crime scene, you could imagine yourself being there.

The defendant's cousin, Angela Medina...when her career in show business takes off, she'll have DBHS Mock Trial to thank. She is so believable, so convincing. Her last answer for the court, "it seemed like Bailey (the defendant) was hiding something."

The forensics expert, who has investigated over 40 drownings, Cindy Chen, was brutal! The cross examiner had no chance against Cindy's knowledge of the facts. He thought he could stump Cindy with gibberish about rigor mortis but he clearly didn't understand who he was dealing with.

Finally, the friend of the victim, Halil Balik- she just moved here from Ohio. We are SO lucky she ended up at DBHS. Her delivery, her presence, her answers, all flawless.

Our court clerk, who keeps everything moving, Emily Zhang, perfect score from all 5 scorers because she is that impressive!