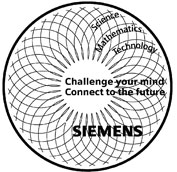 Derek Chang has been named a semi-finalist in the 2009-2010 Siemens Foundation Award in Math, Science, and Technology.

The nation’s leading original research competition in math, science and technology for high school students, the Siemens Competition is administered annually by the College Board, awarding college scholarships ranging from $1,000 to $100,000 in individual and team categories. The Siemens Competition is a signature program of the Siemens Foundation, the national leader in supporting science, technology, engineering and mathematics (STEM) education with contributions surpassing $7 million each year.

A record number of 1,348 projects were received this year for the Siemens Competition, an increase of 12 percent over 2008 figures. The number of students submitting projects increased by 14 percent while more students than ever, 2,151, registered to enter. This year, 318 students were named semifinalists along with 96 students being honored as regional finalists. The combined 414 semifinalists and regional finalists hail from 34 states and the District of Columbia.