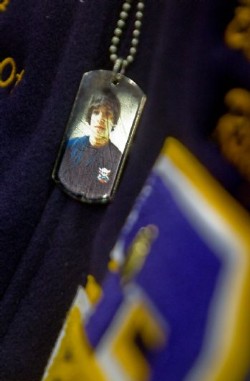 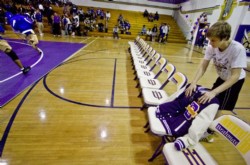 DIAMOND BAR - Before each home wrestling match, the Diamond Bar High School wrestling team sets the letterman jacket of Brandon Riley on the chair he once occupied.


For them it's a reminder of how precious life is, and a memorial to a 16-year-old who lived his to the fullest before his death as a result of spinal meningitis on Sept. 11. "I look back and think of Brandon as this underdog you wanted to root for because of the cards he was dealt in life, and how he responded to it all," Diamond Bar's wrestling coach, Scott Usher, said.


Last year, Usher became the Brahmas wrestling coach, and in a short time learned a great deal about Riley, who would have been a junior this season.

Brandon's father passed away when he was very young, and then his mother died of liver failure when he was in seventh grade.

After moving to live with his aunt Maryelen, uncle Brian and cousin Matthew Moore, also his teammate on the Brahmas wrestling team, more tragedy hit home when Brandon's uncle Brian died due to complications from leukemia.

Yet all along, those who knew him best said Brandon remained strong. The teen stayed active in many organizations. He was an avid member of his church group and had a passion for music in addition to spending long hours honing his wrestling craft.

"I always envisioned the future of him coming out on top, being successful, proving people wrong and showing that even though have you have challenges in your life, you can still come out on top and be successful," Usher said.

Riley had asked Usher what he had to do to be a captain, and was fulfilling all those requests, attending wrestling camps and working vigorously through the summer when he started feeling flu-like symptoms.

The symptoms grew worse, and after a visit to the doctor in late August, Brandon began experiencing seizures and was checked into the hospital, learning later that he had developed spinal meningitis, an inflammation and swelling in the lining of the brain and spinal cord that forced him into an induced coma because the seizure's had become so rampant.

He never recovered. Brandon's adopted family took him off life support after learning he had little to no brain activity. Word of Brandon's passing began to spread at a Diamond Bar High football game that Friday night.

"It had already been such a difficult week, exchanging phone calls, getting updates, and just waiting for him to get better," Usher said. "He was just a kid with a an entire life ahead of him, you're not thinking about death, you're thinking how is he going to recover from this.

"Then we all heard the news and nobody really wanted to leave the field that night. It was challenging for all of us, we had to stop and take a break from wrestling and athletics, and take a look back at life and what we're dealing with and how we take things for granted."

Brandon's spirit, however, has lived on, with the Brahmas wrestling team still in the hunt for a Sierra League title for the first time since 2000.

"We're having a great season, I don't think it's a coincidence," Usher said. "We were hoping to honor him in that way."

Usher remembered what former Brahmas head coach Jack Cooprider told the team. Cooprider has been part of Diamond Bar wrestling for years, and still is a big influence.

"He said if we're going to honor Brandon, we can't fail," Usher said. "Those were some strong words, we all took it to heart."

Junior Andrew Stilkey wrestles at 119 pounds and was Riley's best friend on the team. In the Brahmas' final home match on Thursday, Stilkey draped his jacket over the chair used by his 112-pound friend, and the Brahmas promptly beat Damien, 43-30.

"I get a lot of mixed emotions, I'm happy he's up there watching us and helping me during my match, but we all miss him," Stilkey said. "I use what happened for motivation and to do this for Brandon.

"It has been hard to get back in the swing of things, it was a difficult shot of reality, you don't think of a friend dying.

"But it also has brought us all closer together. We know Brandon's up there cheering us on, and I have worked harder than ever before."

The months since have been especially hard on Matthew Moore, who lost his father in addition to losing Brandon, who was like a brother to him.

"You learn that people pass and you have to accept it," Moore said. "Brandon had it tough, but he was still always smiling, laughing, working and living life to the fullest. That's the best way to honor him, to just live life like he did."

A car wash at the school helped raise more than $4,000 for his family, a much needed boost for his aunt Maryelen Moore, who had been taking care of him.

"The car wash was supposed to start at 10 a.m.," Diamond Bar athletic director Kurt Davies said. "By 8:30 a.m., cars were already lining up, and they were still lining up late in the day. Brandon was just special. I had him in a class and he just lit up the room."

That's how Usher will remember him, always smiling, cracking jokes, and figuring out ways to wear his head gear so that it didn't mess up his hair.

"There was one time he was just about to pin a guy, then looked over at the coaches and blew us all a kiss," Usher said. "He just loved life."