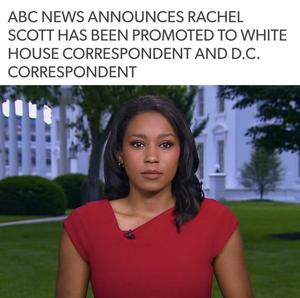 Scott has covered the Democratic primary this year and President Donald Trump’s reelection efforts, and did a sit-down with Sen. Bernie Sanders (I-VT) and Rep. Alexandria Ocasio-Cortez (D-NY) during her trip to Iowa before the caucuses. She’s also covered every Trump rally this cycle, including the Tulsa event.

More recently, she has been reporting on the protests following the death of George Floyd, including the demonstrations at Lafayette Square, and reported from the historic Greenwood neighborhood for the network’s Juneteenth special.

She also reported on Trump’s impeachment trial earlier this year, and interviewed Vice President Mike Pence on the final day of the impeachment vote.

ABC News President James Goldston announced the promotion in a note to staffers on Monday.

Scott started at ABC News in 2016 as a production associate. She later worked as a producer for GMA Digital, when she took on an additional role as an on-air correspondent for ABC’s affiliate in New Haven. She moved to Washington, D.C., in January, 2019 to serve as a producer on the network’s White House team, and later became a Trump campaign embed. She then transitioned to on-camera reporting full time.

“She is an exceptional reporter with an unwavering dedication to great journalism, keen ability to handle fast-breaking news and considerable skills for juggling multiple assignments,” Goldston wrote.