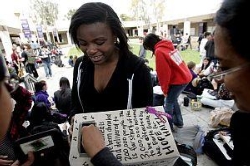 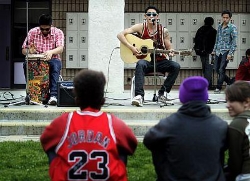 It wasn't a "We Are the World" concert with superstar singers. It was more "We Are Diamond Bar High" with super students. But it was just as entertaining.

The Brahmas reached out to Haiti last week with a series of fundraisers to help the small island nation that had been ravaged by a massive earthquake.

The upper quad at the local campus was filled with music at lunch time three days last week. Students serenaded their classmates for donations to the Haiti Music Relief fund.

Other groups joined in with the Black Student Union deciding to donate the profits from their Apollo Night show in the theater on Feb. 26.

Earlier in the week, the tennis team raised more than $4,000 for the American Red Cross to help in Haiti.

Still, some of the students felt they could do even more. And the idea for Haiti Music Relief popped up in junior Nieman Gatos head.

"I think most of us brush aside these terrible tragedies and say leave it to the Red Cross to handle. But I feel we're blessed with great schools and families, so we should do more," the 16-year-old explained.

So Gatos approached Principal Denis Paul, who approved the lunchtime performances under the supervision of teachers Lauren Osajima and Anthony Tietz.

"The students really did everything, from recruiting the acts to printing up flyers and emceeing the shows," said Osajima. "I was inspired by their passion to help."

Senior Michelle Lin joined the cause, coordinating the acts and helping out with the shows. The 17-year-old noted that the money would be donated to UNICEF for Haiti relief.

"We live in our own little bubble in Diamond Bar. We're blessed with great families, supportive friends and a good education. It's time we give back," said Victoria Patterson.

The passionate 17-year-old junior founded the Invisible Children Club, which raises money for orphans from the civil war in Uganda.

Patterson was raffling off gift baskets for Haiti relief.

"I work at In-N-Out Burgers and my boss donated gift certificates for the raffle," Patterson said.

"This is our seventh show. We'll have 15 acts performing tonight. It'll be great, and we're donating the proceeds to UNICEF," the 17-year-old junior said.

Kpaduwa was electric as she introduced the different acts.

Earlier in the week, the All Male Dance Crew had wowed the noontime audiences.

As the high school students milled around the grassy plaza, others passed around a decorated shoe box for donations.

"We raised more than $400 for Haiti so far," Gatos reported.

The Black Student Union had already sold out its presale tickets for the Apollo Night.

Everyone pulled together to prove "We Are the World" at Diamond Bar High School.

PICTURE 1: Randy Sion, 15, left, and Josh Viloria, 17, both of the band One Take, perform during a Haiti relief fundraiser at Diamond Bar High on Feb. 26. (Sarah Reingewirtz / Staff Photographer)