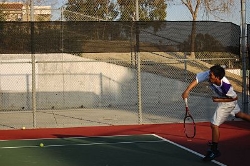 This story was posted on sgvtribune.com on February 22, 2010.

So when he saw people texting to donate to Haiti relief, he had an idea.

"I have a whole team of boys and we can do more than this," he said.

On Monday, the varsity and junior varsity teams - 26 boys total - presented an oversized check to the Red Cross for $4,214.23 raised through a "serve-a-thon" and taking pledges earlier this month, school officials said.

"We talk so much here at Diamond Bar High about being global learners and to be aware of what's going on in the world," Athletic Director Kurt Davies said. "It's great that they know about the world but also that they want to do something about it."

One day after school, the teams took pledges for the number of serves the players could make out of 100 tries, Davies said.

And with the team likely to be ranked among the top teams in the region, the players raised a considerable amount of money, he said.

"It was a pretty good workout too," Davies said.

Hamel told his players not to go easy on the serves and try to hit them at least three-quarters speed. Many of them hit as many as 80 and 90 serves, he said.

The school cheerleaders also helped draw attention to the drive, he said.

Principal Denis Paul said he was excited for the players.

"Their interests are not just confined just to tennis," he said. "Coach Dave Hamel teaches the kids about life, and he does it through tennis."

It's one of three schoolwide efforts for Haiti, Paul said.