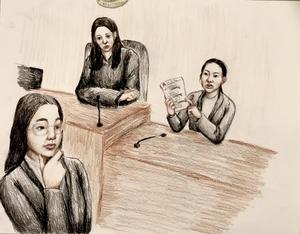 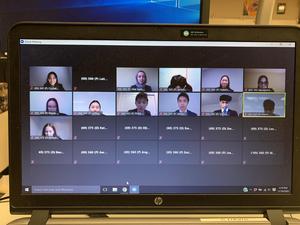 Our DBHS MOCK TRIAL is competing virtually this year. It has been pretty interesting so far. They report that one of the advantages is not having to take the long bus ride into downtown L.A for each competition.

So far, they have competed in the only two guaranteed rounds of competition. They had to win those to move on. They did! They will now compete in the first elimination round on Tuesday, Nov 17.

Angela Liao is our team's courtroom artist, this year, Her submission can be seen below. Because the competition is through a zoom meeting, Angela had to create a fictitious courtroom. She did a great job. The three people depicted are the judge, the witness, Victoria Wang, and the attorney, Crystal Tsao. If you know these students then you know how accurate this representation is.

Tuesday will be top 24 out of 74 teams, if they win, they will be in the top 16 Thursday. Prosecution performs Tuesday.

Below is a picture of some of our DBHS team members. The opposing team had their cameras off in the 30 minutes before the competition.

Hopefully, the will have many updates to come in the weeks ahead. Go Brahmas!