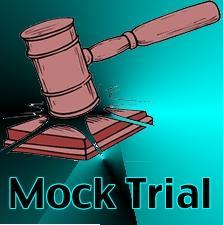 Tuesday, November 17, our DBHS MOCK TRIAL team was one of 24 undefeated teams who competed. If they had lost, they would have been out of the competition. They did not!
Thursday, November 19, they will be one of the 12 undefeated teams which will be competing for a spot in the SEMIFINALS.
Tuesday night's competition was amazing!
Harris Daud was the pretrial attorney for the Prosecution...if you know Harris, if you have heard his even tempered manner of communicating, that is NOT the guy who performed -Harris was savage. He pointed out the flaws in opposing counsels arguments, both in his presentation and in his answers to the judge's questions. It was exactly what the response to the Defense's motion is supposed to be.
Hilal Balik-trial --- the attorney who does the opening statement. She has earned nearly perfect scores for her opening the two times she has given it. Scorers have singled her out for her opening and her overall performance skills.
Crystal Tsao --- directs two witnesses and crosses two witnesses, that's more than the other attorneys. A highlight of this virtual format that will be talked about for years: the witness Crystal was cross examining was supposed to have his own copy of the evidence, he didn't, Crystal needed him to read from it so she shoved it up against her camera so he could see it, read it to him then forced him to admit that she has read it accurately.
Phillip Ma --- the third trial attorney, "The Closer." Yes, his cross examination of the defendant was brutal for the defendant. But, nothing was as brutal for the Defense to hear as Phillip's memorized, 6 and a half minute closing. One of the scorers took the time to reach out to say that it was one of the best closings he had ever heard.
The witnesses:
a) Victoria Wang: unflappable, unstoppable....she is a "STAN" of a fictitious YouTuber and she SELLS it!! I accidentally stumbled onto a conversation between a scorer and the judge at the end of the night where the scorer couldn't find the form to nominate Victoria for BEST WITNESS (such nominations must be made in the first two rounds so no luck with that)
b) James Wu, Officer Bird, what a convincing police officer he is. Obviously having benefited from the tutelage of our resident officer, Ken Carlson. James knows his facts so well, he cannot be hammered hard enough to change his story.
c) Reyna Wan: the expert, MD in fact...she is so believable, one of the scorers wrote, "I forgot I was watching a teenager, I actually thought I was listening to an MD."
d) Jeremiah Jung, remember that name. This freshman has a voice that is going to take him places and an intellect that will take him even further.
Finally, Natalie Zhou, the clerk. Never have the skills of the time keeper been more apparent than in this virtual setting. Natalie is so efficient, so competent and utterly essential.
The competition is sure to be much tougher THURSDAY night but our Defense is ready thanks to the help of Ken Carlson, a man who has himself been called to testify in court countless times and one of LA County's finest Deputy DA's: Angela Brunson.
It's going to be an exciting night:)
Coach Latitia Thomas, Coach Margaret Ku and Coach Ken Carlson
Print