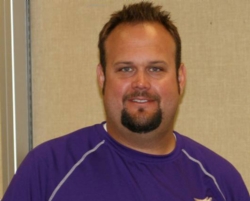 
After wrestling only one year when he attended Rancho Cucamonga High School, Scott Usher felt he had unfinished business.

He vowed to finish that business when he took over as Diamond Bar's head wrestling coach less than two years ago.

Two seasons later, he's helped transform Diamond Bar into one of the area's resurgent wrestling programs and doing it in the face of adversity and tragedy along the way.

As a result, Usher is the Daily Bulletin's Wrestling Coach of the year for the 2009-10 season.

As an athlete in high school, Usher primarily was a football player and an All-League and All-CIF lineman before graduating in 1999.

Friends got him to compete as a heavyweight for the wrestling team his senior year, and he also was a thrower for the track and field team in the spring.

"My focus was on football," he said. "My one regret that I had was that I didn't wrestle until my senior year."

Usher is in his eighth year coaching and teaching technology at Diamond Bar, but his coaching was limited to serving as an assistant football and track coach until a couple of years ago.

"In the past, there was a strong (wrestling) tradition from my impressions," Usher said. "I wanted to build it back."

The team finished 2-3 in the Sierra League in 2008-09, and Usher and the Brahmas then had to deal with the tragic death of teammate Brandon Riley from spinal meningitis in September.

"We dedicated everything to him," Usher said of Riley. "I worked hard and put my heart into it and so did the kids."

Usher helped keep the team together and led them to a spot in the CIF-SS Dual Meet Tournament. Diamond Bar then sent two wrestlers to Masters, one of whom (junior heavyweight Brian Ryu) also qualified for state.

"Making it to state was exceeding my expectations," Usher admitted. "I knew we were going to be better."

Usher tried to help everybody on the team with new singlets and other equipment for the season.

Part of Usher's strength is keeping wrestlers around.

Senior James Grigorian hadn't made it through either of the previous two seasons before he quit the team. This time, he stuck.

"I didn't want to wrestle at all because I didn't like the conditioning," said Grigorian, who plays football and does shot put and discus for the track team.

Grigorian said he stayed around because Usher was not strict about Grigorian conditioning with the team. Had he been forced to practice with the team, Grigorian might have quit.

"He wasn't too strict on me being there, but he made sure I was conditioning on my own, like lifting or running," said Grigorian, a Sierra League 215-pound champion. "He made sure I knew I had to be ready and win."

Gregorian said Usher helped him a lot in other ways.

"He's a really good coach. He helped me with a lot of mental preparation," he said.

After weathering the storm and earning some success, Usher can build some more success.

"From the beginning, I told them in the next couple of years, someone could make it to state. We had the talent. I didn't know it would be this year," Usher said.