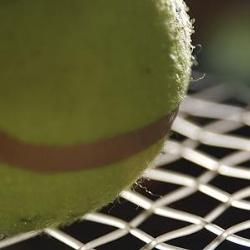 While the Diamond Bar track team used the last race of the day on Thursday, April 15, to pull off a major win over league rival Glendora, there was an equally 'epic' battle taking place on the tennis courts against San Marino. Our boys' tennis team dominated the doubles courts as Austin Chen, Terry Mork, Teddy Zanias, Derek Fu, Calvin Li and Jonathan Chen took seven out of nine doubles sets. However, the singles courts were not so kind. Diamond Bar would take only two of nine sets to bring the match to a tie after regulation play. To break the tie, games won within the sets were counted, but, the score remained tied, 82 to 82! Losing light quickly, both teams had to return to the courts to play a series of tiebreakers. The match was called due to a loss of light....but not before Diamond Bar had taken the lead, 4 - 2 in tiebreakers to clinch the win!
Print