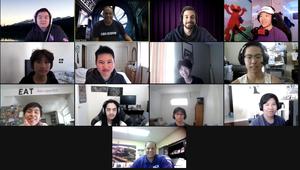 Monday, January 11, 2021, Principal Jones met with the DBHS Overwatch team to congratulate them for qualifying for the national finals! Congratulations to our DBHS Overwatch team for qualifying to play in the North American Esports Federation (NASEF) NATIONAL FINALS in February 2021! The team played well in the regular season and in the single elimination playoffs, often scoring wins of 3-0.

Here is a list of the team members and their roles they play in the game:

Overwatch is a team-based multiplayer first-person shooter developed and published by Blizzard Entertainment. Described as a "hero shooter", Overwatch assigns players into two teams of six, with each player selecting from a large roster of characters, known as "heroes", with unique abilities.
Print