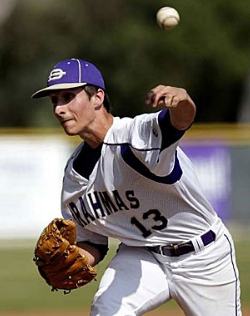 
There are times athletes do stupid things when they lose their composure in the middle of a sports competition, whether throwing a golf club, smashing a hand into a wall or letting loose a profanity-filled outburst at a teammate.


That's why it is so important to teach teenagers how to respond when they experience failure, because once the lesson is learned it can be used in all aspects of life.


In more than 30 years of covering high school sports, I have concluded that one of the most important situations for a coach occurs after a defeat. The good ones use it as a teaching moment; the bad ones are too upset and leave their players wandering for answers and direction.

It's in those dreary, seemingly helpless moments that leaders rise. It usually comes from a single individual, and to watch it unfold is inspiring because it tells me that person is going to be successful at the next game or the next level.

Call it resiliency; call it determination; call it maturity.

I saw it with a young quarterback named Kyle Boller from Newhall Hart. His team lost a football game to Los Angeles Loyola on a botched field goal. But there was Boller, head up, speaking confidently afterward about the games ahead.


I saw it in a young quarterback named Casey Clausen from Mission Hills Alemany after his team lost a playoff game to Santa Ana Mater Dei. In tears, Clausen talked about the sacrifices he and his teammates had made and how they had nothing to be disappointed about.


Both went on to start as freshmen in college — at California and Tennessee, respectively — and the signs that they would be mature enough to handle success and failure were visible for all to see during their senior years of high school.


Last weekend, I witnessed another example of a top high school athlete showing he was ready for the next level based on how he responded to adversity.


It was the seventh inning of a scoreless baseball game. Then came two errors, allowing three runs to score. Junior left-hander Kenny Mathews of Diamond Bar walked off the mound without showing any emotion. Others might have thrown their glove or got into the face of the infielders who made the errors. Diamond Bar lost to Glendora, 3-0.


Afterward, Mathews was poised and Yoda-like.


"There's nothing I could do," he said. "I pitched a good game. Errors are going to happen. I'm a fielder myself. You can't get down on guys. You have to live with it and get to the next pitch, the next batter. Staying calm and relaxed is something you have to have to be a successful baseball player, especially at a higher level. That's something I'd like to have."


Mathews is committed to Cal State Fullerton, and based on what I saw, he'll be ready for college ball and beyond because someone has instilled in him the understanding that if you give your best effort, even it's not good enough, there will be another game to try again.


The eventual winners are the ones who learn from their mistakes and move on.