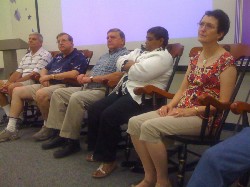 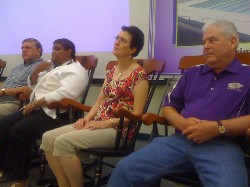 He added, “[DBHS] is going to be even greater in the years ahead, but it needs someone who’s going to be here for the long-haul; the calendar tells me that it’s not me.”

Paul has been the principal of DBHS for 12 years, and been a part of this school’s staff for 28 years, since the school opened.

Ellis-Quinn has taught at DBHS for 16 years. “When I got hired here in 1994, this was the fourth high school I taught at. I knew that this was where I would stay until I retired. I wasn’t going to move anywhere else; this was the best place,” stated Ellis-Quinn.

“There comes a time in everyone’s life where you’ve got to turn the page and open a new chapter. This seems to be the time,” explained Salmons. He coached the first football team of DBHS while working at Chaparral Middle School in 1982. He started working at DBHS as a teacher in 1985.

Schafer was one of the first teachers that started Del Paso. Over his seven years at DBHS, Schafer has coached football, girls’ soccer, and wrestling. “I’ve been teaching for 37 years, and that’s quite a while. I want to spend some time on things that I want to do now,” stated Schafer.

Superintendent Cyndy Simms of the Walnut Valley Unified School District will be in charge of selecting the new principal for DBHS. The new principal will be announced in July.

Paul commented, “This school is part of my life. I will be the former principal, but I will never be a former Brahma. I will be a Brahma forever.”