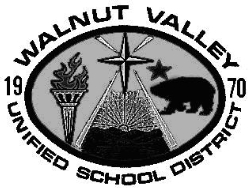 In the midst of the on-going state budget crisis, the Walnut Valley Unified School District Board of Trustees has announced five furlough days for its employees. These days were originally scheduled as student instructional days. The schools will now be closed on the following days during the 2010-2011 school year: