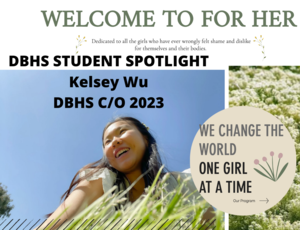 DBHS junior Kelsey Wu is the founder of an international non-governmental youth organization called FOR HER. The mission of the organization is to empower youth to develop a loving, positive and courageous mindset about themselves and their bodies. WEBSITE: https://www.forher.biz/

In a generation currently known to be heavily involved in rallying and helping causes they care about, For Her, an international youth lead non-governmental organization (NGO), has its uniqueness in that they fight for a purpose that is very widely considered silent and underrepresented, especially in today's youth.

"Ever since I was as young as six years old, I had always been aware of the heavy stigma associated with having a bigger body. Having been through bullying and peer criticism for my unique body shape, I fell into a 10-year cycle of dieting and hating myself that eventually led to an eating disorder at age 14," Wu said via email.

Nearly a full year into recovery, Wu said that in the process of taking her life back from an eating disorder, it opened her eyes to see how prevalent an issue negative body image and disordered eating behaviors were amongst adolescents. She said she was shocked that there was not really a youth lead initiative in her community that advocated for body positivity or eating disorder prevention and awareness.

"For Her is a fantastic community that helps me as a member to grow physically and mentally by advocating for body positivity and disseminating eating disorder awareness in this current biased society," Tracy Wang, an executive board member of For Her, said via Instagram.

For Her currently holds a full seven-member executive board and a widely diverse and expanding pool of interns, ranging from geographical regions such as Indonesia, New York, and Los Angeles.

The organization's services currently include a podcast, a blog site, virtual and in-person workshops and events, a fellowship program, policy and legislation growth and endorsement, and seasonally published magazines. This August Wu also intends to publish her first children's book centered around raising awareness in young kids about eating disorders and body dysmorphia, as well as teaching them the valuable lesson of learning to love yourself. The book will be illustrated by fellow executive board member DBHS junior Grace Remirez.

"Thanks to today's technology and advancements we are able to spread our message across seas and deserts and be able to touch as many youths as possible," Wu said.

Many of For Her's services work in collaboration with various famous institutions. An example is the organization's work in policy and advocacy. For Her currently endorses and precedes in various state level and federal level bills. They've worked with establishments such as the Harvard Public Health Incubator STRIPED, the National Eating Disorders Academy, and the Eating Disorder Coalition to help pass bills aiming to prevent eating disorders in youth and giving better treatment and access to treatment for those with disordered eating behaviors. This year Wu testified in the California State Capitol and was invited to virtually advocate at Capitol Hill to speak her mind on these issues.

"Getting to speak in front of congressional members, senators, and their offices was truly an eye-opening experience for me as it allowed me to see how powerful my voice and advocacy was," Wu said.

Over the summer, For Her is currently working hard to continue to build the community and expand its influences. By holding weekly Saturday workshops, releasing weekly podcast and blog posts, doing collaborations, and interviewing prominent body positivity influencers, For Her is working hard to spread its message.

"What I hope for For Her to become is a community where all youth from around the world feel safe to go to and learn from. I hope people can take our message and use it to spread it in their community so that future generations may live in a world where all bodies are considered beautiful," Wu said.