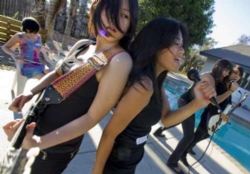 A love of French language and customs, along with no knowledge of instruments proved to be the perfect recipe for Excuse My French, a rock band formed at Diamond Bar High School.

After successfully winning their high school's "Battle of the Bands," Excuse My French was given the opportunity to play the Los Angeles County Fair. The show is at 7 p.m. Thursday.

The girls met through French teacher Anthony Tietz, who is also their band manager.

"I used to be a judge for Battle of the Bands," he said. "After doing it for a number of years, I realized that a band that doesn't know how to play could still win."

And after eight days of practice with borrowed instruments, including a guitar that Tietz bought from a garage sale for $4, the girls took the stage and won the first place trophy.

"We are very showman-centric," said Harb, who sings lead vocals. "We were maybe able to cover a few musical errors with our performance."

The gig at the fair was an added bonus.

"We're kind of in shock," Harb said. "When we first performed, we practiced for eight days and learned one song. Now it's the fair, and we have to learn more songs."

Since the competition, the group has been learning their instruments and mastering the art of being French. Svengali Hudson, a music producer whom Tietz met while vacationing in France, assisted the group with this.

"He really elevated our knowledge of everything," Harb said. "It was really an honor working with him."

The band also added another member, Richard Mule, to play a second set of drums. But because he does not know French, which is the lingua franca for all practices and performances, Mule is forbidden from speaking and wears a shirt over his head.

While members of the group are naturally shy, they have established alter egos they created for the band.

"The first day in French class, we all pick names and personas," said Mendoza, who plays drums. "We all got into it."

Mendoza goes by Charlotte Corday, a woman who assassinated a French revolutionary.

And Harb is Marianne, the symbol of France.

Excuse My French has a choreographed set, including hair flipping during a cover of Superbus' "Unpeu de Douleur" (A Little Pain) and a few spin moves during "Dis-Moi" (Tell Me) by BB Brunes.

They bow at the end of each song to show the audience they are appreciated, Tietz said.

"They went from not really playing and performing to really playing," Tietz said. "It was scary that they could go from one level to the next in three months."