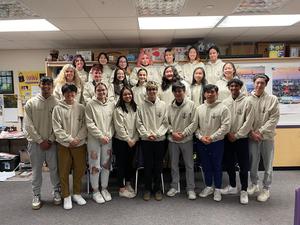 Our DBHS Mock Trial team competed in the Top 16 round Tuesday, November 16, 2021. Our DEFENSE TEAM went against a private all-girls school's prosecution team. WE WON !! It was SO close; the other team was very talented.

The judge ruled in favor of OUR defense after the pre-trial motion. The judge ruled in favor of OUR defendant at the end of the trial. Judges' rulings do not have bearing on who wins the round. Often, the judge rules for reasons he or she has created based on their own reading of the facts or a personal agenda. The reason we mention the judge's rulings from the evening is because in both instances, the judge prefaced his decision with "based on the arguments presented in court tonight."  No greater compliment could we have received!

It really was a stellar night for DBHS. Every student was amazing.

Our Prosecution has performed twice. Thursday, our DEFENSE TEAM will be performing.

We would like to thank and congratulate our staff advisors Latitia Thomas, Margaret Ku and Ken Carlson, in addition to Deputy DA Angela Brunson! Thank you for preparing our Brahmas for this marvelous opportunity!