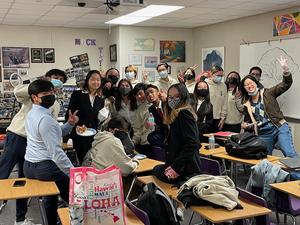 Congratulations! Our DBHS MOCK TRIAL TEAM has made it to the SEMI-FINALS! They competed in the quarter-finals Thursday, November 18, and found out the results Friday via email. At brunch today the team gathered so that the coaches could share the GOOD NEWS! They had defeated the team that came in second place last year.

Our team will compete in the semifinals Tuesday, Nov 30.  Strangely, our DEFENSE will be performing again but since the FINALS are just two days later, Dec 1, our PROSECUTION is gearing up so that they will be able to give an LA County Championship performance on that day.

Here are a few highlights:

Tamim Hatim, a witness, friend of the defendant won MVP, an award given by the opposing team. She has worked so hard to improve her performance skills and last night she killed it. The fact that the opposing team saw her greatness is so validating for her and the entire team who have been right there with her helping her improve.

Chloe Schaefer couldn't be a better herpetologist. Emily Zhang asks her on the stand, "Dr Clay, can you tell us about your experience with snakes?" "Well, before my current job I worked as a naturalist at a few national parks and of course I have lived in the desert for years, I have even been bit a few times, you can read all about it in my book, The Snake Whisperer, Life Among Snakes." She sells it like no other pearl wearing woman could.

And the closing was given by Emily Zhang. Nobody has worked harder to improve their performance skills. She delivered her closing to Mrs. Thomas’ first period yesterday (no notes, just standing in front of the class..it's almost 7 minutes long), they were floored! Natalie Zhou is mastering the art of objecting and Vishnu Nair continues to wow the judges with his seemingly effortless performance style.