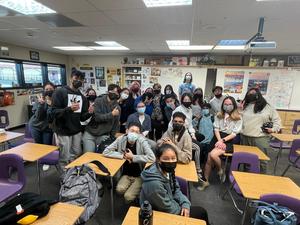 WE ARE IN THE LA COUNTY FINALS!

Congratulations to our MOCK TRIAL TEAM for earning a place as one of the TOP TWO TEAMS in LA COUNTY! They will be competing in the COUNTY FINALS Thursday evening, December 2. The PROSECUTION has been sitting on the side lines for the last three rounds, they'll be center ring tomorrow and they are EXCITED! This will be our team’s third time in the finals in the last 4 years.

Congratulations also go to coaches Latitia Thomas, Margaret Ku and Ken Carlson for leading and teaching our team members during long hours after school. In addition, Deputy District Attorney Angela Brunson (Deputy DA) has been a huge part of their success.

The team members and coaches have sacrificed countless hours to help each other, Zooming, chatting, emailing and Facetiming. The students have even held full extra practices without the coaches.

Some highlights of our DEFENSE TEAM’s performance in Tuesday’s semi-final:

Chloe Schaefer was awarded MVP by the opponent and deservedly so! But, all 4 witnesses: Chloe, Mia, Tamim, Julian gave their personal best performances. The trial attorneys, Vishnu Nair, Natalie, Emily were stellar with sophomore Natalie Zhou bringing the house down with her fierce objections, Vishnu overcoming technical issues and Emily Zhang ending the night with a closing that was singled out by one of the scorers as exemplary.  Pretrial attorney Reyna Wan lost her glasses somewhere on campus yesterday and couldn't read any of her notes when she gave her pretrial argument, the hours she has spent memorizing her argument and every case really paid off. One of the scorers couldn't believe how well she handled questions asked by the judge (of course nobody knew that she couldn't see anything).