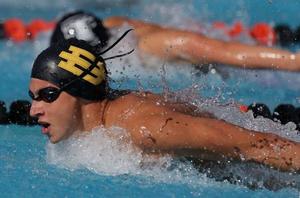 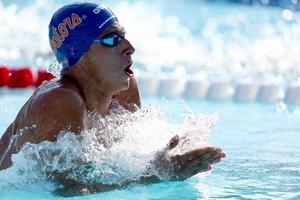 Congratulations to Brahma alum KEVIN VARGAS (Class of 2019) for winning his first national title in swimming at the Phillips 66 National Championships July 28, 2022. The event was held at the Woollett Aquatics Center in Irvine. Kevin, a 21-year-old representing the La Mirada Armada Swim Club, managed an impressive five-second drop off his personal-best in the 400 IM. It was an emotional breakthrough for the former Diamond Bar High swimmer.

During the last CIF competition of his high school career, Vargas managed to break two of his own Division IV records. Working with his Diamond Bar High School teammates, Vargas set the new record for the 200-meter medley relay race.

He also set a new record for his specialty, the 200 individual medley, which is a combination of fly, back, breast and free strokes.

Kevin now trains in Florida along with seven-time Olympic gold medalist Katie Ledecky. They both competed in this match. “She gave me a big hug afterward,” Vargas said of Ledecky, who recently extended her record for most FINA World Championship medals to 22.

“(And) seeing my club coach (Rick Shipherd) really made me kind of teary-eyed because I never got to truly step up at an age-group level so it was nice to finally show him that it was worth all the time he put into me when I was younger.”

Vargas, a senior-to-be at the University of Florida, outdistanced British Olympian and top-qualifier Max Litchfield by about 1½ seconds to touch first in 4 minutes, 11.45 seconds, good for the 11th-fastest time in the world this year and fourth among U.S. men.

Vargas credited the breakthrough to his work with Florida coach Anthony Nesty on improving his backstroke. “Nesty has really pushed me,” said Vargas, who started the Thursday with a lifetime-best of 4:16.54.