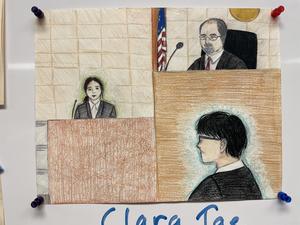 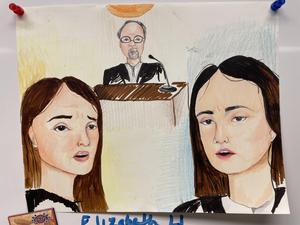 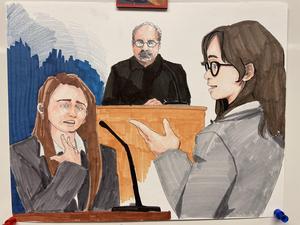 Our DBHS Mock Trial Team is in the TOP 8 (QUARTERFINALS)!
The competition season began the first week of November. Teams are only guaranteed two rounds of competition, one for the prosecution to compete and one for the defense to compete (Only one side competes on any given night against another school’s opposing side). Only teams that win the first two rounds progress any further in the competition.
The DBHS Mock Trial team handily beat their opponents in the first two rounds of competition. After rounds one and two, usually a team has to compete in a “playoff” round in order to qualify for the Sweet 16 Round. This year, the size of the point discrepancy between us and our opponents allowed us to bypass the playoff round and progress directly to the Top 16. Thursday, November 17, was the Sweet 16 Round. Our defense went against the prosecution from a private school in North Hollywood. We won!
We have qualified for the Quarterfinals, Top 8, which we be held the Monday we return from Thanksgiving Break.
A few highlights from the that night:
NATALIE ZHOU (11) gave the pretrial argument. She was AMAZING! Every scorer commented on how impressive she was. The judge told us that she couldn’t think up hard enough questions to ask her, nothing could stump her.
ALEXANDRA CHALA (12) gave a closing argument performance with a skill that trial attorneys would kill for. Completely memorized, she looked right in to the camera (it’s on zoom) and spoke for 6 minutes. Everybody watching was mesmerized.
In between the two performances mentioned above, Vishnu Sriram, a trial attorney, gave a master class is objections and Julian Medina is one of the greatest witnesses I’ve ever seen perform.
ALEXANDRA CHALA was named MVP of the round. Julian Medina was named MVP of Round 1 and Mia Artale, the victim in our case, was named MVP of Round 2. More details about the other performances after the Top 8 Round.
The photos are the submissions of our 3 courtroom artists. Each of them is impressive. In order, find the art of Clara Tae (12), Elizabeth Li (10), and Heather Ma (12)
As always, the help of Deputy DA Angela Brunson was invaluable as was the work ethic and leadership skills of many of our returning team members.