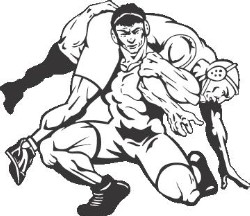 DIAMOND BAR - It was the perfect scenario for the Diamond Bar High School wrestling team.

The Brahmas, with a share of the Hacienda League title in the balance, put it in the capable hands of their best competitor, senior Brian Ryu.

The 2011 CIF State qualifier didn't waste the opportunity, scoring a 7-1 victory over Walnut's Kevin Barber in the heavyweight bout, and the Brahmas clinched a piece of the league title with a 33-30 victory over the visiting Mustangs on Thursday.

Diamond Bar, which received key wins from Nathan Pike at 112 pounds and Ray Sierra at 119, improved to 19-3 overall and 4-0 in league. The Brahmas can win the league outright with a victory over Bonita next week. Walnut, which gave up 12 points on forfeits, slipped to 12-3 and 2-2.

"We've been wanting to win league for a while," said Ryu, who scored four points in the final 90 seconds to score the 7-1 match decider. "We've had so many chances before, like in 2006. I wasn't a part of it, but (coach Scott Usher) was, and we wanted to win this one, because they should have won.

"It's good to help complete a goal for a coach we really respect. I'm pretty excited, pretty happy."

An early crucial moment came when Pike rallied from an early deficit to score a 21-8 victory over Walnut's Adam Corcuera, and Sierra rallied with five points in the final 10 seconds with a takedown and near-fall for a 9-8 victory over the Mustangs' Victor Munoz.

"It started with Nathan Pike," Usher said. "He won a really tough match, then in the final seconds when (Sierra) was down and scored those points, that really fired our guys up."

"There was nothing we could do," Walnut coach Cecil Sebastian said. "We gave up six off the bat anyway. It was a little strategy to bump up (Ahem), but it would have been the same outcome anyway."

Walnut's Randy Collins tied it at 30 with a 7-4 decision over Troy Lanning, setting up Ryu's big moment.

The senior led 2-0 in the first before getting a takedown and near-fall in the third to win 7-1.