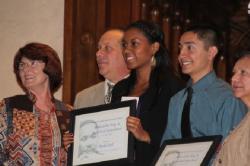 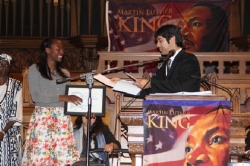 The award, along with a monetary prize, is given to young people ages 15-19 who have "made a difference in their communities, neighborhoods and schools" and who have "demonstrated, by their daily actions, that the spirit of the Rev. Dr. Martin Luther King Jr. is alive."

Momah, who is at the top of her class at DBHS, said her work as the president of the Best Buddies club at Diamond Bar High School relates to King's vision of equality for all.

Momah said she plans to use some of the award money to help start a non-profit organization to benefit Nigeria's poor.

"I feel it is my obligation to help because since my parents moved out here and made a better life for me and my sister, it's my job to give back after college," Momah said. She will be attending Stanford University in the fall.

Scott, who is DBHS's student body vice president and vice president of the Black Student Union, said she hopes to give back to the generations before her through her work. She aspires to be a broadcast journalist and motivational speaker.

Rachel's mother, Gigi Scott, said it is an honor for her daughter to receive the award on the weekend of King's birthday and that she is pleased to see King's spirit is still alive and strong. "I saw it die in the 90s," Gigi said, "you just didn't see it as much and now the spirit is coming back alive again and I just love it."

Gabriella's mother, Arinola Lawson, said her daughter did not inform her that she won the award until two days before the ceremony.

"I was really surprised," Lawson said.

At home, Lawson said she and her husband try to instill King's spirit and hope in their children.

"This is what we need and what Martin Luther King was talking about," Claiborne said. "These will be the leaders of tomorrow."

Seven students in total were presented with the award on Sunday night.