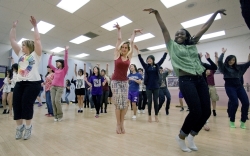 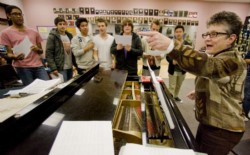 
Students in a city that banned new dancing venues have coincidentally chosen to perform "Footloose" for their spring musical.

The school held auditions Monday for the musical, which tells the story of an upbeat teen who battles a reverend in a city where dancing and rock music are illegal.

The musical is based on the 1984 hit movie "Footloose," which starred Kevin Bacon.

Diamond Bar High musical director Peter Bland did not know about the city ordinance, which was approved last year.

"That's fascinating. That is hysterical," Bland said. "How can you ban something? Why not have regulations or something? That's the silliest thing I've ever heard."

It also capped the number of live-entertainment parties at other venues to once every 90 days. It does not affect the two businesses that were in place when the ban was approved.

Schools, churches and some city-sponsored events are exempt.

Bland chose "Footloose" because he liked the moral of the story, which ends with the protagonist and the pastor coming together.

"It does have a nice message behind it," he said. "It does force a sense of cooperation inside the community. The community has to learn how to cooperate and the people end up having to tear down walls that they have put up."

Throughout U.S. history, towns have placed bans on dancing - usually for religious and moral reasons.

The tension between dancing and the Christian church has strong roots in the Calvinist tradition, said Grayson Carter, a professor of modern church history for Pasadena's Fuller Theological Seminary.

It was banned in Geneva, Switzerland in the 1540s when popular preacher and theologian John Calvin and his friends spoke against it.

"The nature of dancing at that time was seen as pretty licentious," said Carter. "In a time and place where overt sexual activity outside of marriage was forbidden, it was a way to express sexual interest."

In Diamond Bar, the ban is less theologically driven.

It stems from a 2006 issue with a now defunct restaurant that garnered complaints from residents who said it was being run like a nightclub, where underage drinking and crimes were rampant.

Although the City Council unanimously approved the ban, Mayor Pro-Tem Ling-Ling Chang was the only vocal opponent of the "too restrictive" ordinance.

"I still do believe that the ban is too restrictive and that there are other ways in dealing with these businesses than punishing the nondisruptive businesses," Chang said. "I believe that it's an issue where we're using a jack hammer when a fly swatter would do."

But for now, dancing lives on at Diamond Bar High School, with four performances scheduled for 7 p.m. on April 29-30 and May 6-7. Ticket prices are $12 for students and seniors and $14 for adults.

In the past, the drama department has had performances of "West Side Story" and "Seussical the Musical."

"Footloose" was something students could identify with, Bland said.

"It will be a lot of fun and should do very well with the audience," Bland said.

"I really get my emotions out through singing and dancing," said Nieman Gatus, 17, during Monday's audition.

"To take away the only escape... I'd feel like a robot," he said. "You never see it as, `Wow this can actually happen in our town.' Now I want to send a message. It's irrational. Imagine we took your whole passion away. What would you do?"