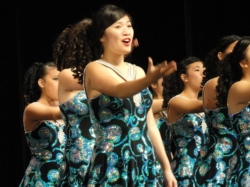 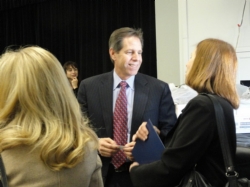 The Walnut Valley Unified School District Wednesday hosted a combined welcome to its new Superintendent Dean Conklin and a celebration of its schools high test scores.

The event, at Walnut High School, gave teachers, city officials from both Walnut and Diamond Bar and parents a chance to meet Conklin. For many, it was a reunion.

Conklin, who took the helm of Walnut Unified on Jan. 17, came back to the district after serving five years as the superintendent of Duarte Unified.  He worked as an assistant superintendent in Walnut for 12 years prior to that.

Conklin said he returned to the district because of its reputation, leadership and depth.

“This district has been known as a district focused on academic achievement, innovation and leadership,” he said.  “The bar has been set very high.”

Conklin said the district, like any other, is facing the challenge of a shrinking budget for education.

In a school board meeting in mid January, Assistant Superintendent Jack LeBrun said the district has a $6 million budget surplus this fiscal year and is an estimated $3 million in the black for 2011-12.  The district faces a $3 million deficit in 2012-13, he said.  District staff is working on a fiscal stabilization plan that will get the budget balanced in that third year.

Conklin received several certificates from City Council members in both Diamond Bar and Walnut, as well as from state political leaders.

Walnut Valley School Board President Cindy Ruiz praised Conklin for his experience and dedication, qualities that will help the district deal with the challenges ahead.

“He is someone who really gets it,” she said.  “He will bring to our district new energy, which we need, as well as new leadership.”

The event also included a performance by the Rhapsody in Blue Choir, who took the stage in shimmery black, green and silver dresses and sung and dance two numbers.

The close of the program included a presentation to all of the district’s schools dubbed a “Celebration of Excellence.”

The 14 schools recognized had Academic Performance Index, commonly known as API, scores ranging from 867 to 951.  The district’s overall score in 2010 was 898, compared to the state’s score of 767 for all grades, according to the California Department of Education website.

The API is a numeric scale ranging from 200 at the lowest and 1,000 at the highest.  A school’s score is a reflection of its performance level on state tests, according to the California Department of Education.  Schools are measured on how they do to move toward or past set targets.  The statewide API goal is 800 for all schools.

“It really is phenomenal,” said Assistant Superintendent Nancy Hogg of the scores.  “We who have been in other districts know what it takes to help children excel.  For Walnut Valley, not only are they excelling academically, but they are excelling as children and as young adults.”

(1) Rhapsody in Blue Choir performs at a welcome event for Walnut Valley Unified's new superintendent and a celebration of academic achievement.