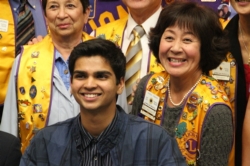 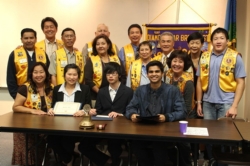 The California Lions Clubs' student speaker contest has a history of tackling controversial issues, and Monday night's speeches on immigration reform were no different.


The contest, in its 74th year, started in 1937 with the topic "Americanism" and has continued through the decades with topics as specific as "Cyberspace: Rights vs. Control" and as open-ended as "My World - My Answer."


This year's topic, "Enforcing Our Borders; State vs. Federal Rights" had three Diamond Bar High School students voice their perspective on where the responsibility lies for controlling immigration into the United States.


Manan Shah, a DBHS senior and VP of the school's Lions Club affiliate, the Leo Club, took the podium first and won this year's competition with a speech declaring it a federal obligation to control all national borders.


"Allowing each individual state to have its own border enforcement policies as in Arizona will lead to 50 different laws," Shah said, "and political tensions that will divide our 'indivisible' United States."


Shah invoked images of the Civil War, and said that state autonomy on immigration policy would lead to disunity and conflict. Shah called Arizona's anti-immigration legislation, known as SB 1070, unconstitutional.


"It seems the Founding Fathers were onto something in delegating border enforcement to the federal government rather than each state," Shah said.


And controversial as the topic may be, each speaker met with a silence after their speech, holding applause or comment until all had completed their discourse and heard the judges' decisions.


Richard Koh, a DBHS junior, spoke second and argued for states to determine their own policies on immigration, citing Arizona law as an exemplar.


"One law cannot be expected to apply to all 50 states," Koh said.


While Shah cited the "supremacy clause" of the U.S. Constitution in his argument for federal responsibility — declaring that federal law trumps any similar state law — Koh said that immigration should be exempt and states would be best served with separate policies.


Michelle Koh, a DBHS senior, spoke third and urged a need for federal and state cooperation on closing up what she said was a $1.3 billion drain on the U.S. economy.


She said that state efforts, like Arizona's, and federal efforts need to be in concert to effectively curb illegal immigration.


"America does need to protect its borders," Koh said, "and the state and national government need to work together to enforce our national borders."


Retired Lorbeer Middle School language arts teacher and contest judge Kevin Mok said he hopes the ideas discussed in the speeches would be considered deeply by lawmakers as well.


"These students are all winners and deserve congratulations for getting the nerve to organize and do the research on such a tough topic," Mok said. "So, let's hope our politicians and lawmakers do the research that you have done also."


For the student who advances to take the statewide speaker contest title, there is $21,000 in scholarship awaiting.


Shah won $75 for his victory at the club level and will now go on to compete on March 7 at the "zone" level. That next round will also be held in the AQMD building's room CC6, with speeches starting at 7 p.m.