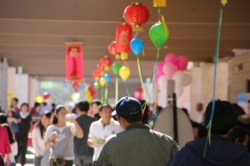 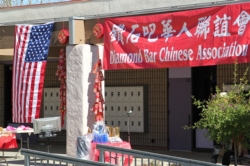 Jenny Koo, organizer of the Diamond Bar Chinese-American Association's 21st Chinese New Year Celebration at Diamond Bar High School last Saturday, said that the annual event is as much about spreading awareness of Chinese culture as it is about passing traditions down from one generation to the next.

"Our kids have grown up in America," Koo said, "and I want them to know more about the good things in Chinese culture and I want to get everybody together."

At Saturday's event, traditions were kept alive in many ways, from the slow and methodical art of Chinese calligraphy to the rapid-fire computation of students active in the Chinese Abacus Association.

Peter Lee, president of the Nan Feng Art Association, was at Saturday's event crafting messages wishing health and peace for the new year, using the ancient symbol of bamboo and special Chinese characters associated with the Year of the Rabbit.

Mike Mao, a member of the Chinese Calligraphy Association, stressed the importance of bamboo as a symbol of Chinese culture.

"Bamboo is the oldest representation of our culture," Mao said. "You can tell something is Chinese when it has the bamboo."

Lee said his earliest practice with calligraphy took place while he was attending the Chinese Culture University in Taiwan.

For some students in the Chinese Abacus Association, their first practice with the ancient calculation tool came much earlier in their education.

Melinda An, a freshman at Diamond Bar High School, said she passed the association's first abacus test in sixth grade and continued on to the advanced level where students compete for speed and accuracy in computing large numbers.

An said that competitions happen on the international level and test a variety of skills, including mental math.

"You're able to get a picture of the abacus in your mind and use that to do calculations," An said.

And, in some cases, the speed of calculations using the ancient device puts it toe-to-toe with the latest computing technology.

DBHS senior Brandon An said the group has one six-year-old member who can calculate five- and six-digit figures in a matter of seconds.

Saturday's morning celebration also featured an array of food vendors, local businesses and organizations, and a full roster of performers from the Diamond Bar Chinese School, which is run by the DBCAA.

Past president of the DBCAA, Tony Torng, said he believes the organization has done a good job of becoming involved in the community since it was founded 20 years ago.

"We started 20 years ago from scratch," Torng said, "and then the next year in 1990, we established the Chinese school."

And since 1990, the Chinese-American Association has grown accordingly, developing the Chinese American Parents Association (CAPA) in 1991 and a program for seniors in 1992.

Torng, who serves on the city's planning commission, pointed to his position and that of another member of city government — Mayor Pro Tem Ling-Ling Chang — as a sign of the Chinese community's civic engagement in Diamond Bar and said he hopes the next generation will take on public service as well.

"We want to help out the community as well," Torng said, "and I think we need to make sure our next generation understands this and we hope that they continue to serve the community."