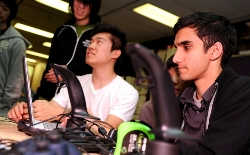 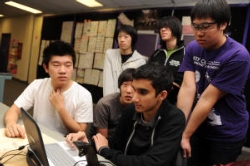 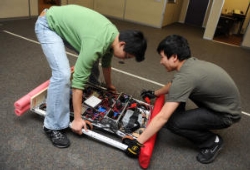 A inflatable ring dangled from the long medal arm as it slowly rose 10 feet to rest on a plastic arm. The arm was anchored by the Sprockets, a robotics team at Diamond Bar High.

The young engineers were testing the robot for their FIRST robotic competition. FIRST is an acronym For Inspiration and Recognition of Science and Technology.

And the Sprockets seemed inspired as they continued to putter around with their remarkable robot. The teens have six weeks to build it from a kit of parts.

Of course, when you've never built a robot before, time flies, even though the Brahmas work on the robot five hours a day five days a week.

"It's been a lot of fun," insisted team captain Brandon Sim. "We don't mind spending time after school because we've learned so much about engineering."

The 17-year-old senior broached the idea to his Diamond Bar buddies when he learned about the international robotics competition. After recruiting computer science teacher Lynn Wan as an adviser, the Sprockets were born.

Putting out a call for volunteers, the teens sorted through a field of 30 candidates to build their team.

"We wanted to see how dedicated they were," Wan explained. "I told them I expected them to show up every day to work on the project. We have very high expectations for our robot."

Soon the field was winnowed down to 17 young roboticists. Brave boys and girls willing to construct a mechanical marvel to compete against the very best robots that 2,000 other teams could devise. No pressure!

The Sprockets would be competing against powerhouses like Arcadia High, which is sponsored by NASA and the Jet Propulsion Laboratory, and West Covina High, backed by Cal Poly Pomona and BAE Systems, a global company engaged in the development of advanced defence, security and aerospace systems.

Fortunately, Diamond Bar was able to woo support from many sponsors, including Raytheon and Harvey Mudd College, one of the country's top math, science and engineering schools.

In fact, the Sprockets were able to raise $19,000, including $6,500 from JCPenney for registration, $5,000 from Raytheon and $5,500 from the Brahma and Walnut Valley Educational Foundations. The school district even chipped in $2,000.

But the rookie team has its work cut out for it.

Buried in the bowels of the local high school, the team wrestled with the design of their rambunctious robot.

Subgroups pondered parts as they envisioned a working robot. Lavanya Jawaharlal and Shannon Fan were testing a minibot built to climb vertical poles for bonus points.

The 16-year-olds were two of the three young women on the team.

"I like robots," said Jawaharlal. "Besides, my father is a professor of mechanical engineering so I've grown up with this stuff."

Fan figured the experience would help her learn more about science and engineering. The teens proudly watched as the powerful little robot rolled up a five-foot-high pole.

"Next, we have to devise a system to deploy the minibot from the larger robot," said Fan.

Nearby, other Sprockets worked on the metal chassis built to careen around the playing field. A sturdy, steel frame carried the same electric motors, batteries and control system used by all the teams.

Arthur Teng, John Kim and Curtis Wang are in charge of the chassis.

A design change had left little room for the battery on the front of the chassis. The fledgling engineers were concerned that the battery might bump the electric motor a fraction of an inch away.

Finally, they called two students from Harvey Mudd College to inspect the vital battery mount. The Claremont college is one of the best science and engineering schools in the nation.

"Is it touching the motor?" asked Harvey Mudd's Sarah Ferraro. "I think it should be OK when you tighten the L-bracket."

The 21-year-old computer science major has lots of experience in the robotics competition. She had been on three high school teams herself and has some funny stories to prove it.

"We built one robot to follow a red light, so it started to follow a man with a bright red shirt at the competition," Ferraro laughed. "Another robot was heavier than the 125 pounds allowed, so we had to cut off the top half of our robot and replace it with PVC pipe."

Hopefully, the Sprockets won't face similar trials, but often the students learn more from their mistakes.

Diamond Bar senior Ayzaan Wahid seemed confident about the control system he had designed with Orson Ou and Ray Pang. The team programmed the robot in its autonomous mode.

"I'm not worried about being the underdog in this competition. I've learned a lot about robotics and want to study it in college," said Wahid, a 17-year-old senior.

Other teammates were mounting a light sensor that the robot would use to follow a white stripe on the floor. Later, the group would test their bot's ability to navigate a course on its own.

But the biggest challenge is the robotic arm used to hang target pieces. Which brings us back to the towering appendage being tested in the high school parking lot.

Students Ian Pan and Asad Akbany designed the vital machinery. Akbany was sure the robot would work well at the regional contest in the Long Beach Arena on March 24.

"It would be great to go on to the national competition in St. Louis at the end of April," said the 17-year-old, who wants to major in biomedical engineering in college.

As the students slowly raised the arm, Wan's husband, Howard, watched closely. The systems engineer has been volunteering his expertise with fellow Raytheon employee Jeffrey Rubinstein.

"I think this kind of hands-on experience is important to get the students interested in engineering and science," Wan said. "I think they're doing a great job."

(1) Diamond Bar High School student Ayzaan Wahid, right, programs their robot in the FIRST Robotics Competition against robots from 2,000 teams across the nation.