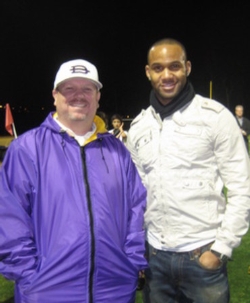 But Lockett hasn’t forgotten his early days as a starting linebacker, safety, and wide receiver at DBHS, when the school’s current athletic director, Kurt Davies, was an assistant coach for Brahma football.

So, when a Patriots’ strength coach asked Lockett if he had any nominations for the NFL’s High School Football Coach of the Year, Lockett said Davies was the natural choice.

“I thought back to all of the coaches that I’ve had in high school and Davies stood out,” Lockett said. “We formed a great bond from the first day that I met him.”

Davies was one of just 48 coaches nationwide to be nominated for the honor, though coach John Sprague of Riverview High School in Sarasota, Florida was named the winner in late January.

“I don’t know any other of the other coaches,” Lockett said, “but to me Kurt Davies is the best coach that I’ve had and that’s why I nominated him.”

In the six years since Lockett graduated from Diamond Bar, the coaching staff has seen a number of changes, and Lockett said Davies’ current position as athletic director shows a loyalty and commitment to Brahma athletics.

Lockett, who graduated in 2005, played on the varsity football squad for Davies. In 2004, Lockett was a first-team All-Sierra League selection as a receiver, according to his biography at the New England Patriots’ website.

After high school, Lockett went on to have an impressive career as a linebacker at UCLA, where he started 11 games as a senior and totaled 61 tackles under the tutelage of coach Neuheisel.

“Coach Neuheisel was very energetic, a great coach and I had a really good playing experience at UCLA,” Lockett said.

After being signed by the Cleveland Browns as a rookie free agent in 2009, Lockett was ultimately picked up by the New England Patriots that same year.

In his two seasons with the Patriots, Lockett said he has had positive experience learning from coach Belichick.

“It’s been a blessing to play for the Patriots and an honor to be around Belichick every day and to be coached by him,” Lockett said.

Davies said the nomination alone is humbling, and is a particular distinction coming from Lockett.

“I am honored and humbled to be nominated,” Davies said. “Bret is a great guy and I'm grateful for (the nomination),” Davies said.