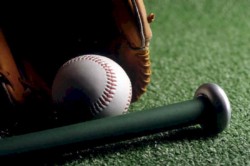 Pitching will be at a premium among area high school baseball teams this season, which begins Friday with a handful of teams playing tournament and nonleague games.

The exception may be at Diamond Bar, where the Brahmas return both starters, including arguably the Valley's best hurler - senior Kenny Mathews. He, along with junior Henry Omana, give Diamond Bar a top one-two punch, which has the Brahmas thinking about a Hacienda League title and beyond.

"We're excited to get the season started," said Diamond Bar coach Eric Shibley, whose Brahmas, armed with Mathews and Omana and a youthful but solid lineup, begin the season No. 1 in the area.

"We're excited for a number of reasons, and having both your Nos. 1 and 2 pitchers back has a lot to do with it. That's huge in high school baseball."

And it will be a big edge for the Brahmas. Mathews is the ace after going 7-3 with a 1.73 earned-run average last season. He also had 91 strikeouts in 73 innings. He's complemented by Omana, who's been clocked in the low-90-mph range.

The Achilles' heel for the Brahmas will be their young lineup, which has to make up for some big-time graduation losses.

"We lost three major seniors to graduation, who had 11 years' varsity experience," said Shibley, whose team was 15-11

last season. "That's difficult to make up, but we have some sophomores who can step up. I'm excited what they bring to the team."

The Brahmas' move from the Sierra League to the Hacienda will also be a plus. Diamond Bar comes into the season as the favorite, but is expected to get a battle from Bonita, which advanced to the Division 3 finals last season.