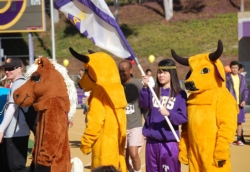 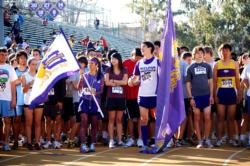 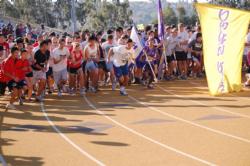 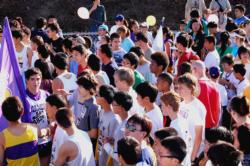 Last year’s event, which also marked the districts 40th birthday, was a huge success with more than $60,000 raised and more than 2,100 runners and walkers participating, according to district officials.

District spokeswoman Kelli Gile said in a press release that this time out the district was hoping to double the number of students, staff, retirees, and parents supporting the event from a year ago.

Event coordinator Jean Hicks said measures were put into place to avoid organizers being swarmed by participants showing up on race day including raising the price of same day registration.

“Last year we had some many people register in the last couple of days, but we learned a lot to help us organize for this year," Hicks said.  "We had a lot more people helping us at registration. We also had a second day of pre-registration on site at Walnut High School.”

“We had a music showcase where about two-thirds of bids were picked up and about a thousand people attended all the school’s performances,” said Jean Chung, Assistant Principal at South Pointe Middle High School.

The Saturday Pre-Race Showcase gave racers a chance to pick up race bibs, goodie bags and T-shirts ahead of time while enjoying musical entertainment by Walnut Valley Unified students from the district’s various schools including South Pointe, Suzanne Middle School and Evergreen Elementary.

Adrian Carrasco, 8, participated in the 1k representing Vejar Elementary school. He said the event was fun and he would probably take part in it again next year.

“It was important for us to help the cause and to get him involved with something outdoors,” said Adrian’s father Rick Carrasco who added the most satisfying part about his son’s participation in the race was watching him practice and seeing him getting some exercise.

For safety reasons, the event was divided into four separate heats, elite runners and other divisions, joggers, light walkers and full course walkers. All runners and walkers who participated received a medal. Christian Valdez was the winner of the 1k, while James McCreary, a member of Diamond Bar High School’s track team came in first place in the 5k run with a time of 15:58.

The high school junior said he didn’t do anything out of the norm to prepare for the run.

“We just have normal high school practice. We don’t have practice on the weekend, but that’s the only extra running I usually do,” said McCreary at the conclusion of the 5k event.  He spoke about what it felt like to place first.

McCreary said he was glad the event was held to help the schools during harsh financial times.

“I was surprised how much money we raised last year. This is a real good thing for the school and the school district.”

Diamond Bar Mayor Steve Tye spoke to the crowd prior to the 5k run.

“It’s a great day for a run,” Tye said. “Congratulations to the Walnut Valley School District in its second annual event.  We look forward to this event being as successful as the last one.”