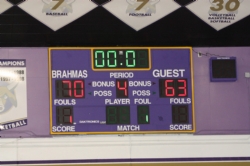 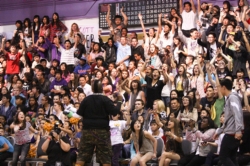 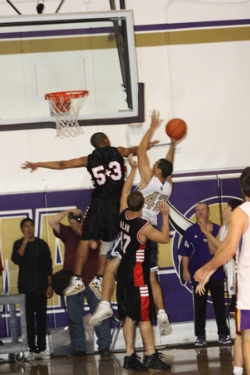 The Gutty Brahmas' — a team of Diamond Bar High staff and faculty — triumphed over the celebrity team, 70-63, but all were working together to benefit the Brahma boys team.

“We had 1,100 pre-sale tickets sold when we were initially aiming at 500,” Coach Watkins said. “I knew then it was going to be a great night.”

The gym had standing room only as the Brahmas welcomed celebrities hailing from hit shows such as Spike TV’s Blue Mountain State, One Tree Hill, 90210 and The Secret Life of an American Teenager.

Watkins was also joined Wednesday by a diverse cast of Diamond Bar staff and faculty.

On the guest side, Cody Linley, co-star of Hannah Montana, and Michael Copon, who stared in Bring It On and The Scorpion King 2, were greeted by a sea of screaming teenage girls who waited patiently for autographs.

But a new celebrity emerged from the Brahma ranks as assistant principal John Terry was encouraged by chants of "most valuable player" every time he touched the ball.

Terry put the Brahmas on the board early, draining a three-pointer and two jump shots to score the team's first seven points.

Terry continued to please the crowd as the leading scorer of the game, racking up 18 points, but he remained modest.

“I haven’t played in so long, I just wanted to get out there and half some fun,” Terry said.

“We are a competitive group,” Frierson said. “We had to go out there and protect our gym, especially against a bunch of celebrities.”

Brahma basketball announcer Christian Calero also stood out, contributing with three blocks. After each, Calero flexed his muscles, sending the fans in an uproar of laughter and cheers.