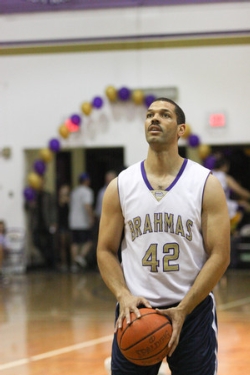 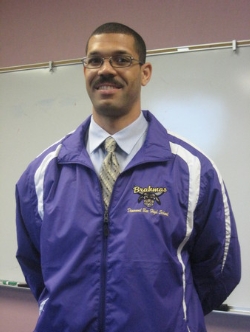 Literally, the former Los Angeles Unified School District administrator towers over many, standing at six feet and five inches, but he works hard at seeing his students eye to eye.

Terry, who has been a Brahma for just over three months, said that he has been extremely impressed with the school and the students.

"I knew this school was special and my initial impression has been just that, it’s a great place to be," Terry said.

Terry said that the structure of the school was what piqued his initial interest in the transition.

"What intrigued me the most about Diamond Bar is its structure," Terry said. "It’s similar to a small college, where achievement is the norm."

Terry comes to Diamond Bar from Maywood Academy High School, where he served as the Dean of Students, coached basketball, and taught social science.

Terry's skill on the court became clear Wednesday, when he scored 18 points to lead the Brahmas faculty to a 70-63 victory over the celebrity Hollywood Knights team. Terry's performance won chants of "most valuable" player from the crowd, but he remained modest.

“I haven’t played in so long, I just wanted to get out there and have some fun,” Terry said after the game.

Terry said that he grew up in an athletic household in Los Angeles, which raised him to excel on the basketball court, baseball field, and track.

But alongside his apprecation for athletic competition, Terry said his father instilled in him a drive toward academic achievement early on.

Terry welcomed the opportunity to play at the college level and earned his bachelor's in social science and history in 1999 while playing basketball and throwing the javelin for the Golden Eagles.

Terry continued to pursue his love of basketball after graduating from Cal State L.A. and played semi-professionally in L.A. for a few seasons.

But Terry soon found his true calling and returned to his alma mater to get his master's in educational administration and leadership.

Terry said that he gained a wealth of knowledge during his time at LAUSD.

“Being a part of LAUSD, I gained a majority of my managerial and coaching experience, for which I am truly grateful,” Terry said.

Terry said that his experience as a coach has also informed his work as an administrator.

Taking from L.A. Lakers Head Coach Phil Jackson's latest book, Terry said that he learned a valuable lesson in not competing with others but in challenging and competing with oneself to become better.

And Terry's experience as a student-athlete helps to give him perspective on the challenges for his students who are navigating both responsibilities.

Terry now looks to his six- and two-year-old sons, who he said seem to have his height already and could be well on their way to a great athletic career.

To his sons and the students at Diamond Bar, Terry said that, above all, they "must make sure that academics come first," that they should "pursue victory with honor" in the classroom and on the field, and that they should also "take time to enjoy their high school years, because it only happens once."