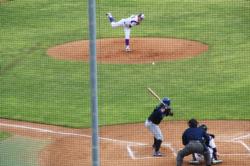 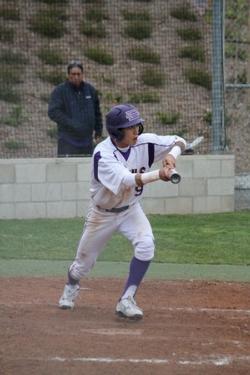 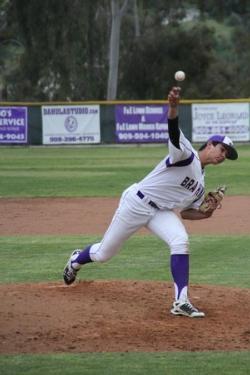 For the first time in his young life, Diamond Bar High senior nine-hole hitter Josh Viloria accomplished a big feat on Wednesday in a 6-1 victory over Diamond Ranch.

The centerfielder hit a home run to lead off the bottom of the third inning, blasting a pitch by lefthander Kevin Lengyel over the left-field fence, which tied the score at 1-1 for the host Brahmas (4-4).

Viloria later added a double in the fourth, scored another run on a single hit by Jason Kimsey and had his biggest game of his career thus far. Viloria also started a double play in the fifth that thwarted a rally attempt by the Panthers (2-5).

The game was shortened to five innings, after the home-plate umpire called the game due to rain. It counted as an official Hacienda League game, the first time the teams ever met in baseball.

“Good things happen when you don’t try to do them,” Viloria said. “It was by far my best hitting day. Diamond Ranch beat us in every other sport, but it was never really any intense rivalry with them. We came up ready to play.”

Diamond Bar starting pitcher Henry Omana made sure Diamond Ranch did not start any serious rallies in his first start of the season. After Ray Gonzalez bunted home a run in the top of the third inning, Omana was nearly lights-out. He allowed one run over five innings, just two hits, walked two and struck out five.

“I just trusted my defense, made them put the ball in play,” Omana said. “We definitely wanted to come out and beat them, because we wanted to win every game in league.”

“It’s a new league, we’re excited to be a part of it,” Shibley said. “We’re not going to take any game differently than the others. They’re all going to be the same. Our goal is to play good baseball, and hopefully we can win our league.”

Diamond Bar put together three-run innings in back-to-back fashion. It went ahead for good in the bottom of the third. Designated hitter Tommy Delgadillo drag-bunted his way on to first, then Cal State Fullerton-bound Kenny Mathews singled him to third base.

With UC Irvine recruit Jonathon Munoz at the plate, Diamond Ranch catcher Dylan Goodwin threw a laser to third, and appeared to have Delgadillo nailed.

But the throw was wide of third baseman Rouric Bridgewater, and Delgadillo scored for the 2-1 lead. Omana helped his own cause, with an RBI single up the middle.

In the fourth, Kimsey singled home a run, then he scored on a hit-and-run executed by Mathews that was dropped in right field for an error. Munoz drove home a run with a double for the final 6-1 advantage.

“We talked to our team at practice about making adjustments,” Diamond Ranch head coach Dave Francis said. “A few of them got first-game jitters. We left a couple of pitches up (in the fourth), they came through. We’re still finding ourselves.”