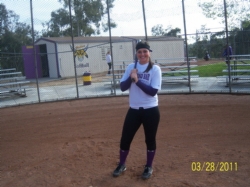 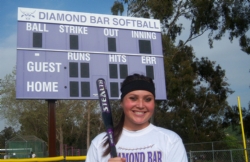 Stephany LaRosa will be the 30th softball player from Diamond Bar High School to play for a college team – and she has a great chance to be the best yet.

How good is she? She signed a letter of intent with UCLA, last year’s NCAA champion – after her sophomore season.

“That summer we got back from Colorado (from a showcase softball tournament),” LaRosa said. “They kept asking me to come up there, they kept saying, ‘Take a look around the school.’ And being so young, both my coach and my parents were like, ‘Well, we’ll wait a little bit.’ They kept asking — we’re like, ‘OK’."

LaRosa, now 18, had a more natural fit at UCLA than the other teams who recruited her — like the University of  Washington, the University of Nebraska, University of Arizona and Arizona State University. On top of that, LaRosa has Corona Angels teammates from her club ball team that play for UCLA – Dani Yudin, B.B. Bates, and Jessica Hall (of Ayala High in Chino Hills).

“I wasn’t expecting to get anything,” LaRosa said. “I was just trying to get to know them (at UCLA). It was a surprise.”

But the UCLA offer was no surprise for the recruiting staff.

“I went up there, took a look around the school…," LaRosa said. "At the end of the day, they said they had a full-ride scholarship for a shortstop and they'd like to know if I was interested. I said, ‘It’d be an honor to be a Bruin’.”

“I look forward to getting Stephany in our lineup. Stephany has great power and presence each time she steps into the (batter’s) box. Her versatility will be a strength in our infield in 2012.”

Last season, LaRosa was named the most feared hitter in high school softball by The Los Angeles Times. She was an ESPN Rise All-State member, and was second-team all-CIF.

She drilled pitchers to the tune of a .514 batting average, with five home runs, 17 runs batted in and 16 runs scored.

“It seems to be a little pressure,” LaRosa said. “It makes me work harder to keep that title. You have to land on time."

And as the pressure increases, so does LaRosa's thinking about stepping up to the plate.

"Hitting — as you get older — you have a job to do, instead of going up there blindly,” LaRosa said.

Now comes a little pressure with being a sort of "Golden Child," or "Brahma Bruin" of sorts. As of March 28, LaRosa has already hit a home run, batted .467 and driven in five runs for the 2-4 Diamond Bar team that recently won its first Hacienda League game over Diamond Ranch, 5-4.

“You always feel pressure,” LaRosa said. “It was a real honor, but the hard work didn’t stop there.”

LaRosa said UCLA’s coaching staff is looking toward her as a potential No. 3 or No. 4 hitter. With their entire infield graduating by 2012, she’s looking to compete for a starting job and said that “no one’s set” in stone for a starting spot in the batting order.

“She’s gotten more confidence over the years,” Garcia-Uyemura said. “She’s an all-around player. She has power at the plate, speed on the bases."

But Coach Garcia-Uyemara was not done.

"She’s very aggressive, if a ball gets past an infielder, she won’t hesitate, she acts on instinct. She’s got such a sure glove, she’s gotten hits to holes in the defense and has saved us at critical times.”

Garcia-Uyemura said LaRosa and former catcher Rachel Fulden, a 2004 graduate who attended Marshall University and is now in the women’s professional league, are the two best players she’s ever coached.

“I’m so excited for (LaRosa) to get to play at UCLA,” Garcia-Uyemura said. “The top one percent get to play there."

But parting is bittersweet, Garcia-Uyemara said.

"We love having her as part of our program.”

And her decision to stay close to home is partly a decision based on experience, LaRosa said, whose older sister Brittany LaRosa, used to pitch for the University of California Berkeley.

“A lot of things played a huge role (in my decision),” LaRosa said. “I had a sister who went to Berkeley and the six-hour commute was hard on my parents."

LaRosa said even with frequent trips home, her older sister was too-often missed.

"She was always a role model," LaRosa said. "That’s something most softball players don’t have. It was real nice."

Off the field, LaRosa has a solid record as well. In her junior and senior years, she earned a 4.0 grade-point average and she plans on majoring in biology at UCLA and entering the medical field.

LaRosa also said that having her father, Vince LaRosa, as an assistant coach at Diamond Bar was a helpful support.

“He brings a lot to the game,” LaRosa said of her father. “He pumps you up.”

However, her father said it was Stephany who would always push him to the softball field.

“She had a lot of knowledge at such a young age,” LaRosa's father said. “She traveled all over the country seeing her sister play. When she was 14, she was answering questions at UCLA as if she was 19."

Channeling the perception of a father and the knowledge of a coach, Vince said Stephany still has some room to improve.

"Sometimes she still swings out of control while trying to hit home runs," her father said. "But when she makes a mistake, she knows exactly what she did wrong. She’s a tough kid, she works extremely hard.”