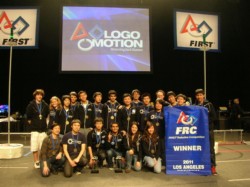 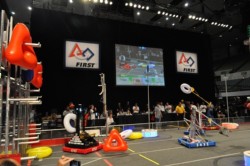 The Diamond Bar High School Robotics Team came out on top in a pack of 63 schools during a Los Angeles Regional competition March 25 and 26 at the Long Beach Convention Center.

The competition pitted the Diamond Bar "Sprockets" against other students from around the state to see which teams could design and deploy a robot to hang shapes on a tall scoring grid, a feat requiring precision and speed.

The Brahma bot, "RoboKoP," was equipped with a 10-foot arm and a mini-bot that was deployed to climb up a pole at the end of each match.

The victory at the regional FIRST (For Inspiration and Recognition of Science and Technology) competition means the team will now move on to a national contest in St. Louis at the end of April, where the Sprockets will meet with nearly 2,000 other teams and 51,000 other students.

While the chance for national success lies ahead, the contest has already yielded big rewards for team members like senior Asad Akbany.

"This was the best experience I've had in my four years of high school," Akbany said. "I was taking what I'd learned in the class and then applying it to build a functioning robot."

Akbany designed the vital machinery for the robot and took the lead on designing the bot's 10-foot arm.

Over 30 students vied for a spot on the 16-member team at the beginning of the year, when students stared down just six weeks in which to build their competition robot.

Team advisor Lynn Wan said each team member was expected to work on the project every day after school, dedicating up to five hours a day on RoboKoP.

The team also enlisted the help of students from Harvey Mudd College and Raytheon to check the soundness of the team's construction before the competition.

"The Harvey Mudd students had a lot of experience and gave us a lot of strategies," Akbany said. "Without them, we wouldn't have gone as far as we did."

During the competition, the Sprockets were in full force, even assigning some team members to keep tabs on the designs and performance of their competitors.

This year marked the 20th season of the regional FIRST competition, which aims to encourage students to pursue careers in science and technology with help from scientists at the Jet Propulsion Laboratory in Pasadena and engineers from aerospace companies and university programs.