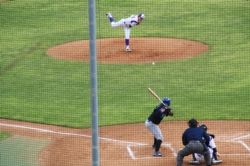 From their league victories against Hacienda league opponents to tournament match-ups, Brahmas baseball has scored a remarkable 82 runs in one week.

Brahmas baseball has had an impressive week in league and tournament play. From their league victories to tournament match-ups against Capistrano, Ramona, Buena Park and La Habra, the Brahmas have scored a remarkable 82 runs.

Sophomore outfielder Austin Szulczewski was selected as the Maxpreps Player of the Week. This season, Szulczewski has maintained a .371 batting average (BA), racked up 13 hits, 2 steals, and a solid on base percentage .421 (OBP).

Senior pitching and out fielding sensation Kenny Matthews has turned heads by leading the Hacienda League with a whopping 41 strikeouts, standing in 3rd place with a .522 batting average (BA), has tallied 24 hits, 12 runs, and holds notable on base percentage (OBP) of .566. Brahmas continued their scoring streak by demolishing Buena Park 13-1 on Monday, April 4th and earning another 2-1 victory Tuesday, April 5 against La Habra.

Diamond Bar looked to continue their momentum as they faced Troy on Wednesday.

The lady Brahmas have won three of their last five games in both league and tournament play this weekend. Grabbing wins against Walnut, Ontario and Madera.

Diamond Bar will play in the Beach Tournament in Arroyo Grande Friday, April 8th and 9th at Arroyo Grande high school. Their next league game will be home against Los Altos April 15th, first pitch at 3:30 p.m.