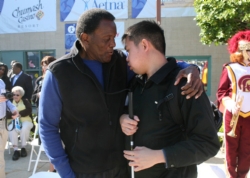 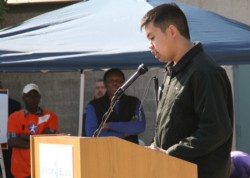 Andrew Luk, a freshman at the University of California Los Angeles, has been a competitive athlete since before his days on the Diamond Bar High School swim team.

But for a while, Luk had thought the world of athletics was not for him.

"I thought sports were closed off to me because I was blind," Luk said. "I thought I couldn't enjoy (athletics) at the same level."

At the age of five, a brain tumor caused Luk to lose his sight; but by fifth grade, Luk began participating in the the Junior Blind Olympics in Los Angeles.

"The Junior Blind Olympics really opened up a new path and gave me confidence," Luk said.

The event, put on by the Junior Blind of America organization and in its seventh year, hosts athletes ages 6-19 from across the southwestern United States to compete in events including archery, shot put, 50- and 100-yard-dash, and a game called goalball, created for visually impaired athletes.

On Saturday, the 19-year-old Luk returned to the annual event, taking the podium before 1,000 attendees to encourage a new generation of around 200 young blind athletes to get and stay involved in athletics.

"(Sports are) something all young kids should get involved in — whether blind or not — because it teaches so many life lessons about teamwork and hard work," Luk said.

Luk said that the day's events are all focused on removing the obstacles of blindness and allowing athletes to enter olympic competition uninhibited.

In the 50- and 100-yard-dash, for example, Luk said that competitors hold a baton and run alongside a rope that leads them to someone waiting at the end of the line.

"That removes the barrier of navigation," Luk said. "And once that's been established, then it's all about how fast you can go — how good of an athlete are you?"

In his first year at the Junior Blind Olympics, Luk said he didn't win any medals, but he did win the confidence to continue competing and to join the Diamond Bar High School swim team in his sophomore year, under the guidance of the late coach Mike Spence.

"It was a challenge," Luk said, "but after a while I started to feel just like any other member of the team."

Luk's heroics on the swim team built him a reputation at the school and his triumphs were documented in a feature in the Los Angeles Times in 2008.

Luk said that swimming had been a regular recreational activity for the family, and after joining a summer class at Mt. San Antonio College, he was ready to talk to his high school coach.

"The main thing is that we needed a coach that would make accomodations with things, like when I would get to the end of the lane," Luk said.

Coach Spence and senior swimmer Lynn Han devised a solution: a 75-inch long plastic pole with a tennis ball at the end.

"He would tap me on the shoulder and then I would know that I need to turn back around," Luk said.

Luk said he is product of the lessons he shared at Saturday's event about "the importance of sports in instilling confidence in blind children."

"You can go to college and get a career if you don't allow visual impairment to be an obstacle," Luk said, "and you must always be willing to learn from other people."

And that, Luk said, was the best part of his experience swimming for the Brahmas.

Saturday, Luk said he was joining in the efforts of the Junior Blind Olympics to help the young athletes achieve independence on and off of the field.

"(The Junior Blind of America) really stresses the importance of dignity through independence and going to school," Luk said. "They do a lot of great work."

Luk's performance in the pool also earned him a scholarship from the organization Swim with Mike, started by star USC swimmer Mike Nyeholt who became paralyzed from the chest down after a motorcycle accident in 1981.

Luk is the first recipient since the organization's start in 1981 to attend UCLA, where Luk said he plans to major in history, political science, or philosophy.

For Luk, the lessons he learned working with the Junior Blind of America and the Brahmas swim team have helped him meet this most recent challenge of stepping on campus as a freshman at UCLA.

"The first quarter was extremely difficult," Luk said. "It was difficult because I was learning a new environment and having to get oriented with the campus."

By winter quarter, however, Luk said he felt pretty settled in.