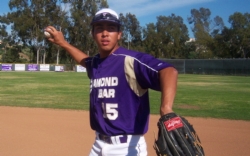 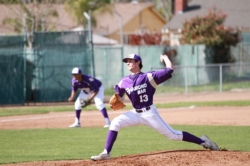 Very soon, Diamond Bar High School seniors Kenny Mathews and Jonathan Munoz will have a tough decision to make – the kind plenty of guys would give their throwing arm for.

Both Mathews and Munoz are drawing interest from Major League Baseball scouts who are looking to pick them in June’s Major League Draft. They will soon decide whether to enter the draft and become professional baseball players, or begin playing college next spring.

Mathews, a 6-foot-3 left-handed pitcher and first baseman, committed to play for Cal State Fullerton as a two-way player. He said he would likely be put on the same basic workout as fellow two-way Titans player and likely 2011 draftee Nick Ramirez. Cal State Fullerton is currently in first place in the Big West Conference.

The MLB draft, however, is on June 6-8 in Secaucus, N.J., and will be online at MLB.com. For both players, the choice only complicates preparation for CIF playoffs, which begin next week.

“It’s hard to say,” Mathews said of his decision. “It depends on what happens. It’s interesting, it’s exciting. All the sweat, all the tears, it’s the moment of truth."

Mathews said his decision will be tempered by the round he is drafted, his family's input, and where he has the greatest chance for success, but the dream of the bigs retains a distinct appeal.

The decision to sign with CSUF over other programs who consistently appear in recent College World Series, like UCLA and Louisiana State University, came from Titans coach Dave Serrano.

Mathews also took advice from current San Francisco Giants prospect Gary Brown, who is a former Diamond Bar and Cal State Fullerton star. Mathews was an eighth-grader when Brown was a senior at Diamond Bar.

He has allowed only 12 runs (seven earned runs), 38 hits and three doubles, with no home runs allowed, in 50 innings pitched. He has struck out 61 batters and walked six.

And he's done it with wicked speed. His fastball has reached 93 miles per hour. He also features a slider, curve, and change-up.

“I love pitching,” Mathews said. “I just do what I do well. Knowing hitters, making adjustments has been part of my game."

The perspective from the mound has also made Mathews a force behind the plate. He has hit .435 from the third spot in the batting order with 13 runs batted in – placing him second on the team.

Mathews said his best game this season was a shutout against Los Altos — in his career at Diamond Bar, his best memory is going ahead of defending CIF champion Glendora by a margin of 1-0 at home.

Diamond Bar head coach Eric Shibley said there have been at least a dozen teams looking at Mathews, including the New York Mets.

“Kenny is an extreme competitor and loves competition,” Shibley said. “I’ve referred to him as a bulldog … he’s vocal, he’ll let someone know if they’re slacking."

On the other hand, third baseman Jonathan Munoz exhibits a more subtle leadership.

"Jonathan is a quiet leader who understands the game," Shibley said. "He’s been solid, he’s held it down for us."

And the only direction for Munoz, Shibley said, is up.

"He’s a great athlete who’s had to play out of position for us and he hasn’t reached his potential yet,” Shibley said.

Munoz, a left-handed hitting third baseman who took over the shortstop role for the Brahmas, committed to UC Irvine (third in the Big West at 8-4, 26-12 at the start of the week). Munoz said the Tampa Bay Devil Rays, among at least four other teams, have shown interest in him.

“The Rays have been the biggest ones who’ve shown interest in me,” Munoz said. “I’m looking to go to school. I will consider (entering the draft), if the money’s there and it’s a good fit.”

Munoz has struggled at the plate this season, however, batting .238 as of May 2, with nine RBI and 10 runs scored, after hitting .360 as a junior and .470 as a sophomore, when he took over the third base starting job and never looked back.

This seasons's slump, Munoz said, has a lot to do with his time spent on the court, playing basketball for the Brahmas in the fall.

“I took a six-month break from baseball," Munoz said.

During that time, Munoz led the Brahmas in scoring and was second in rebounds for a squad that reached the first round of the CIF-SS playoffs. But a rewarding season on the court came with a price this spring.

"I got into bad habits. I was trying to do too much, swinging too hard, pulling the ball too much, not hitting the ball where it was pitched," Munoz said. "I feel like I’m getting better."

He is a two-time All-Sierra League first-team member and was on the Atlanta Braves scout team as a sophomore and a junior.

Munoz said the switch to shortstop, his old spot growing up, has been fun.

Mathews said his best play with Munoz was a 3-6-3 double play from his first base position.

"I’ve taken a lot more leadership," Munoz said. "I’ve been more vocal. I was home-schooled until I was in seventh grade, so I’ve learned how to improve my social skills."

Already, there has been the foreshadowing of a healthy rivalry brewing between Munoz and Mathews. When Cal State Fullerton played UC Irvine in early April and the Titans won two out of three contests at Goodwin Field at CSUF, Mathews and Munoz let each other know about it.

“Whenever they play, we were texting each other," Munoz said. "We’re always ready to play against each other next season."