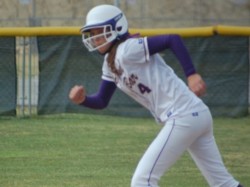 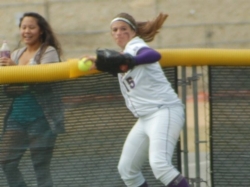 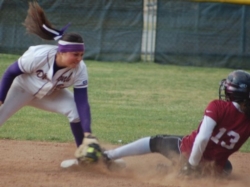 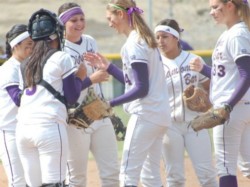 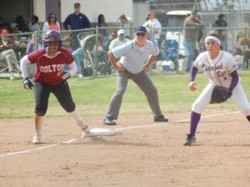 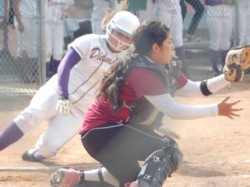 The Diamond Bar High School softball team’s first playoff appearance since 2005 was short-lived as the visiting Colton Yellow Jackets squeaked out a 3-2 victory Thursday afternoon in first round play of the CIF Division 2 playoffs.

Despite the loss, Coach Roberta Garcia-Uyemura was very pleased with her team’s performance.

“This was a good game," Garcia-Uyemara said. "It could have gone either way.”

Coach Garcia-Uyemara said the team showed particular strength in league and the season marked growth for the team.

“I am very proud of our accomplishment in winning a share of the league title this year and making CIF for the first time since 2005,” Garcia-Uyemara said.

In Thursday's game, the Brahmas had trouble on offense, with hits either finding the fielder’s gloves or other roadblocks.

Trailing 3-1, Diamond Bar’s Amber Montes would be thrown out at the plate on a hard hit double by Stephany LaRosa in the third inning.  LaRosa, however, would score on an RBI single by Liz Rubalcava to close the gap to 3-2.

“(Colton) made very good defensive plays to stay in the game and kept us from scoring,” Garcia-Uyemura said. "We couldn’t get any breaks.”

LaRosa continued to lead the way for Diamond Bar, going 2 for 3 with a run scored. Rubalcava went 1 for 3 with one RBI.

Colton emerged early with a run scored in the first inning. After Courtnee Laughlin struck out, Kaylie Garcia would double and then score on Alyssa Vasquez’s RBI single.

Garcia would once again be in the midst of her teams’ three-run third as she would walk and then score on Yvette Ducoing’s RBI single.  Marcilena Valenzuela would also score in the inning.

Garcia, Valenzuela, and Ducoing all went 1 for 3 in the game. Garcia scored two runs, and Valenzuela scored one run.

“They came out at the get go, getting the hits — the timely hits.” Garcia-Uyemura said. “The scoreboard does not lie. Seven to three, they just outhit us.”

Diamond Bar scored its first run when Danielle Wilson walked. She would dash to home after a throwing error by Ducoing.

While losing power-hitter LaRosa to graduation and UCLA, the entire team including pitcher Danielle Wilson, who is a sophomore, will return for Garcia-Uyemura.

“Stephany was an awesome asset for us during her time here,” Garcia-Uyemara said.