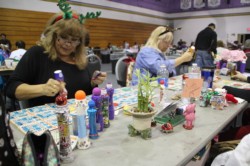 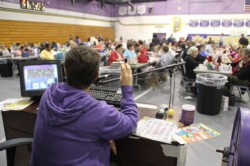 As the Brahma Boosters group ages, Boosters President Larry Young said the work of the fundraising organization has become more and more central to the school's operation.

While the Boosters are celebrating 28 years of operation during Saturday's bingo games, the growing importance of the group's donations is not necessarily a good thing.

"The school values our contributions more than ever before," Young said. "Now (the school) is hanging on our every word to find out how much we've brought in over the last quarter because they don't have funds from other sources."

For the Boosters, a group that supports many of the school's organizations with unrestricted donations, a bad economy has proven a challenge as well.

"Our donations have been less than in the past and attendance at the bingos has been less," Young said.

On average, the Saturday night bingo events would bring in around 200 players Boosters Treasurer Tim Penticoff said in late December.

To tackle the attendance problem, the Boosters are offering raised payouts for Saturday's bingo, which will be set at $350 instead of the usual $250.

"This is a special way of thanking the patrons for their continuous patronage," Young said, "because without them, we don't exist."

Saturday's bingo will include a special cake-cutting and cake delivered by students from the school's United Student Body, as well as a 3-minute video that will detail the impact of the donations on the school's various clubs and student organizations.