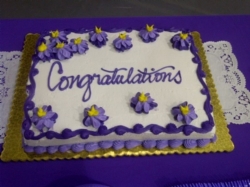 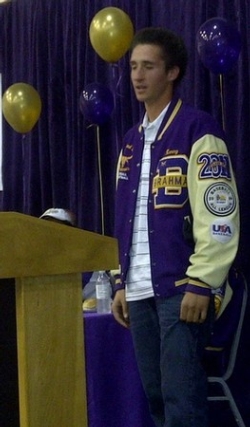 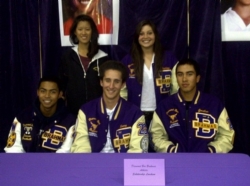 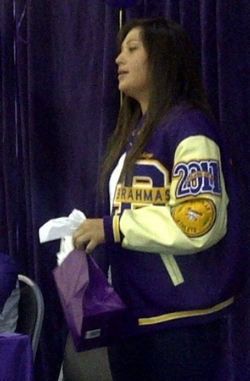 Five Diamond Bar High student athletes were honored Tuesday as they prepare for the transition to college-level competition.

Maggie Yang, Jonathan Munoz, Kenny Matthews, Neil Ignacio, and Stephany LaRosa will all be moving on to athletic scholarships at their respective colleges.

Tuesday's luncheon celebrated the achievements with parents, coaches, and staff members in attendance.

Maggie Yang, who is one of the most accomplished golfers in Brahma history, will be attending William Penn University in Iowa.

As a Brahma, Yang was a four-year starter, a part of Diamond Bar’s four consecutive undefeated league records.

“(Yang's) leadership and play was such a big reason for our team’s success,” coach Tony McCabe said.

Yang grew tearful as she thanked her parents and the Brahma athletic department Tuesday.

Jonathan Munoz, a four-year basketball and baseball player, will be venturing out to UC Irvine next fall to play baseball.

Munoz earned both academic and athletic recognitions in both sports.

Head coach Eric Shibley said Jonathan is a “silent leader who lead by example and was someone I could always count on.

He is a testament to what a student athlete should be,” Shibley said.

Mathews will be just a few exits down the 57 freeway at Cal State Fullerton. Matthews will join former Brahmas like Felipe Garcia, Danny Dorn, Dustin Miller and Gary Brown, who have all played at CSUF and had success baseball careers.

“I am so humbled and honored to be playing at the same school where so many great guys started,” Mathews said. "I hope to contribute to that legacy once I get to Fullerton.”

Neil Ignacio will be continuing his soccer career at UC Riverside in the fall. The battle-tested and passionate player has had his taste of knock-downs on the soccer field, but coach Kemp Wells said the forward has tenacity and perseverance.

“One thing I have definitely learned from coach Wells is to never get up and to stay competitive,” Ignacio said.

The UCLA-bound softball slugger, Stephany LaRosa thanked her parents for their time, generosity, and commitment since her childhood.

The DBHS Rookie of the Year tuned heads as soon as she stepped foot on campus, landing on the San Gabriel Valley All Freshman Team, taking the role of captain of the junior varsity basketball team, and earning the Los Angeles Times “Most Feared Hitter” her senior year.

The only starting senior on the team, LaRosa lead the Brahmas to a second half run of the season, tying Bonita for a share of the Hacienda League championship.

“It has been a delight to see Stephany mature and grow throughout the season,” head coach Roberta Garcia-Uyemura said. “It was also really funny to see if any of the opposing pitchers were going to try to pitch to her.”

Diamond Bar’s Athletic Director Kurt Davies expressed his gratitude and admiration to the student-athletes and their families.

“I truly appreciate everyone making Diamond Bar a great place to be by having such pride in your school and striving for a winning tradition,” Davies said.

In addition to the five athletic scholarship recipients, there will be 134 senior athletes awarded during the school's graduation ceremonies June 2 for their completion of four years in the same sport.

And 16 athletes will also be awarded the Tri-Sport Award for participation in three sports during the school year at any level of competition.

Overall, the Brahmas have had one of their most successful years, with sixteen of their seventeen programs making it to post season play.